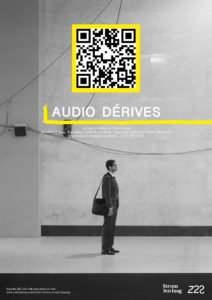 In Audio Dérives the audience is turned into the performer. This audio walk takes the listener from the Amstelpark to Amsterdam’s financial district the Zuidas. Guy Debord’s Theory of the Dérive (1956) is introduced while reflecting on the immediate surroundings and architecture of the neighborhood.

This solitary experience examines the poetry of walking in the urban environment. Solitary walks took on a different meaning during the pandemic. While the digital realm gained dominance within our daily lives, public space became one of the few places where art could be experienced safely.

Audio Dérives uses text and original music to offer a refuge from the digital space that seemed so dominant during lock-down. The audio walk can be walked any time of the week with your own smart phone and headset by downloading a QR code on a poster outside of het Glazen Huis which forms the start point of the expedition. Audio Dérives was part of the exhibition Mind Your Step in 2020. Afterwards the audiotour can be permanently experienced from the starting point at Zone2Source / Het Glazen Huis in Amstelpark Amsterdam

About the artist
In her artistic practice, Esther Hovers investigates how power, politics and control are exercised through urban planning and the use of public space. She was trained as a photographer but creates installations in which photographs, drawings, text and film play an equal part.

This art work was developed in collaboration with Zone2Source, an international platform for Art, Nature & Technology in the Amstelpark, Amsterdam. In the coming years Zone2Source wants to develop the Amstelpark into a park for art and ecology and a testing ground for the Chtuluceen, in which we practice the intertwining of man and nature. Other works that allow visitors to experience the Amstelpark differently are Floriade Whisperings by KCCM, Plantsoensociologie door de Onkruidenier, Buzzbench by AnneMarie van Splunter, Odoshi Cloud Sequence by Ronald van der Meijs, Pit Portal by Karin van Dam, and the soundwalk Secret Garden by Justin Bennett.