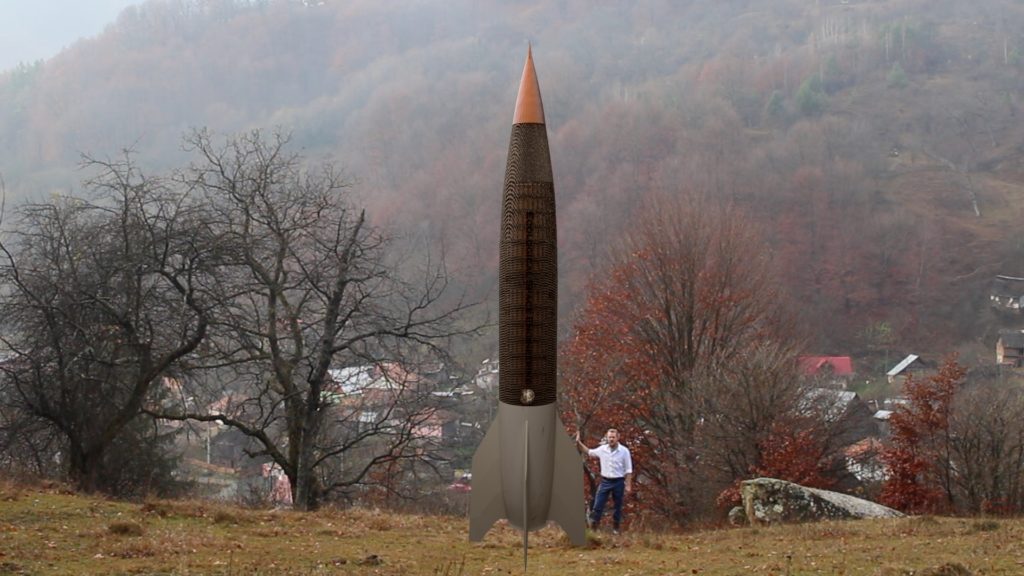 Jos Volkers bioremediating Missile is built by him in Romania.The object built in the form of a V2 rocket and built from biodegradable materials such as wood, textile and clay. The name actually betrays its content, the “Bioremediating Missile” is filled with seeds, spores and nutrients such as water and minerals. The project was developed within the framework of the Volkers fictional company Ecological Space Engineering (E.S.E.). This company engages in speculative design to improve the quality of life on Earth.

The rocket is a symbol of the state of the world and refers to the ecological crisis, technology, war and the role of humans. Volkers has set up a branch of Ecological Space Engineering in Romania and made the object there. The highlight of the project and part of the artwork is the open and full transport from Romania to the Netherlands and showing the installation at various art festivals and exhibitions. Amstelpark is the second location after Groningen where the seed bomb will be on display.

Jos Volkers previously exhibited his work Future Office of Ecological Space Engineering at Zone2Source in the group exhibition Where Art and Science Meet in 2013/14.

Jos Volksers has received a subsidy from the Mondriaanfonds and Kunstraad Groningen for the production costs and has financed the transport from Romania to the Netherlands through a successful crowdfunding campaign at Voordekunst. For the presentation in the Amstelpark, Jos Volkers made an application to the Advisory Committee for Art South (ACK).