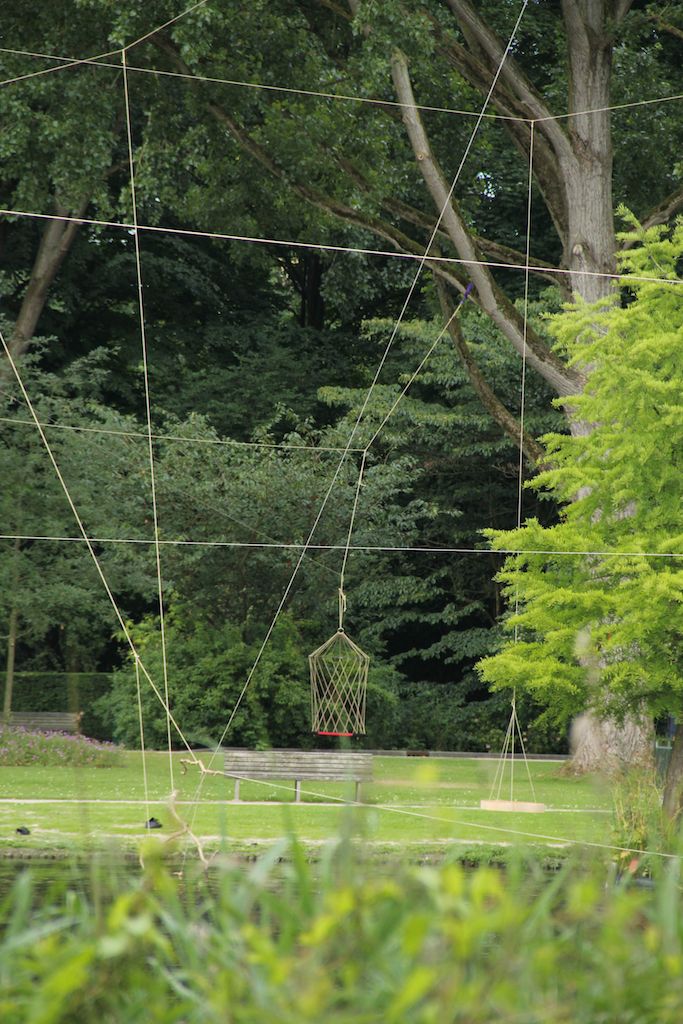 Chiel Kuijl designs a new work over the big pond of the Amstelpark: a
work for the birds. The installation consists of an interactive rope
sculpture with swings and two pending feeding scales: some large branches
and feeding bowls above the water as a seat for birds and a swing on the
side of the pond for moving the installation by people. The shape of the
installation isinspired by rhizomatic growth – a principle of biology in
which organisms arise from one center with roots which again consist
themselves of several roots, and so on. One by one, rope by rope, plank
by plank, a coherent unity is created that permanently stays in motion
thanks to the open hang construction. A wave structure is revealed which
makes the structure of the work visible and spreads the movement to all
corners. By fixing different weights/nutrition scales at specific points
an infinite imbalance is created. The birds and the elements put the
movements in motion, in a network in which everythingis connected to each
other. The wave motion that occurs, spreads out to all boundaries and then
comes back. With the ropes a meeting point between nature and art is
created.

For Chiel Kuijl nature is not an object, place, or being, but an event, a
movement and a process that is constantly in motion. It is all around us,
always. Nature consists of microscopic parts which in turn are connected
to larger chains of parts and so forth. Clsohiel Kuijls work a consists of
many small elements that make up a larger whole. Kuijls work grows as
nature with its own rules and behavior. From a fascination with insects
and mass behavior Kuyl started hanging and connecting a miniature habitat.
From there he started to work in the open air and the challenge became how
to capture free space.The installations of Chiel Kuijl consist of
connectionsion in space. It is an exploration for space, t that wehe
nothing that we feel around us but that only becomes visible when
something takes space. Everything around us is drawn to the earth. By
hanging objects in space they become more free from gravity and objects
change context. Subsequently the weights are replaced by living beings and
the elements which start the movement. The public can create movement
through swings, stairs and plateaus en the elements are used through wind
or water catchers. The movement of one person is directly connected to
another. Everything is interconnected.