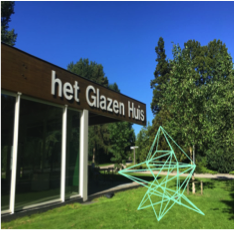 For Re: Tune we invite artists who develop work from different strategies around the question: how can we attune differently to non-human forms of life and train new techniques of attention and observation?

All 3 participating artists are selected because of their different focuses on what a community can looking like exploring exchanges between different forms of life. They are developing new art projects that are presented both as interactive artworks in the exhibition and can be used as tools in various audience interactions, performances and workshops which are organized for various audiences, from experts, students, to children. The exhibition provides the context for the launch of the School for MultiSpecies Knowledges, developed in collaboration with Irina Shapiro, in which the artists together with other participants explore tactics that can be used to develop interspecies communities.

Pei-Ying Lin in collaboration with Yi-Fei Chen, Discourse of a Viral Boundary
Artist Pei-Ying Lin collaborates with social designer Yi — Fei Chen (both Taiwan, based in Eindhoven) to investigate the diversity and variations of the human encounter with viruses and how it is facilitated and mediated by objects. During the height of the Covid-19 pandemic, people felt emotionally lost and confused because of the speed of the virus’s development and the changing knowledge and situations with which we must adapt to a changing environment. If we view our internal and external world in the context of communicative disease, we have built our immune system as a boundary between us and the viral others, a biological boundary. But if we look from a cultural aspect then the masks, masks, disinfectants etc. are the cultural-physical boundaries between us and these ‘viral others’: the expansion of our immune system manifests itself at the level of the artifact. 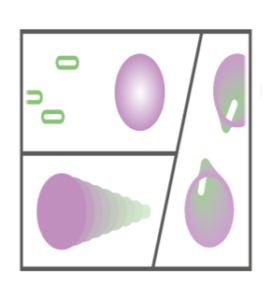 In a new work Discourse of a Viral Boundary, the artists investigate whether human artifacts can be catalysts for psychological evolution. If we push our boundaries against viruses with certain artifacts, can we use these artifacts as a catalyst for mental changes? For this project, the artists develop a set of tools such as rules, games, maps, objects, role-play interviews around the theme of viral encounters – in other words pandemic. These tools facilitate us to channel the deepest human desires and fears about these events, resulting in the design of objects that serve as an extension of the immune system to our fear. These objects are then returned to the scenarios to investigate how they are used as catalysts of change. The project thus provides a framework that can be used to investigate the many possible alternatives of relationships between humans and viruses.

Anton Kats, Sound Crystal
Anton Kats (Ukraine, based in Berlin) is an artist and musician who develops art projects that deal with self-organization, self-education and often target marginalized communities. In his artistic practice he focuses on alternative forms of learning and the development of learning platforms that are necessary to generate critical and practice-oriented knowledge of the everyday. Because of these working methods and form of artistic research coupled with special interactive works of art, we asked Anton Kats to develop a work that focuses attention not only on human but interspecies communities. Sound Crystal is an interactive sonic sculpture (1.75 m. High and 2 m. diameter) of steel tubes in the shape of a crystal and a mobile sound laboratory that will be placed outside the Glass House. The work builds on previous works by Kats in which he explores collective sound, rhythm and listening. Sound Crystal is on the one hand an autonomous sculpture and musical instrument that interactively produces sound through touch on all surfaces of the tube polyhedral sculpture. It can be activated by several people simultaneously playing it together as an instrument. On the other hand, the Sound Crystal is a sonic laboratory for field research and workshops in the Amstelpark. The sound lab consists of a case with two speakers, a mini laptop, a set of microphones, sound recording equipment, headphones and an artistic protocol how this set can be used to investigate sound in the park and how the sounds can be uploaded in the sound sculpture. This tool box can be used for workshops or connected to the sculpture with which the sound files found in the park can be played by the public. At the start of the exhibition, a workshop will be held, the recordings of which will form the sculpture’s first sound library. During the exhibition, we give workshops with various audiences: experts in sound art and a person involved in the School for Interespecies Knowledges, people with general interest, children (we work together with local BSOs), and students. The workshops consist of field research that starts with simple listening exercises and responding to the environment of interspecies living to which we want to attune. The Amstelpark is our working area. What forms of life are there, and how can we tune in to all those different scales and rhythms of life? Starting with listening exercises, being open to the sounds of life around us, participants will work on creating a sound map of the park. Recordings are made in small groups and the sounds collected – recordings can include sounds found in the park as well as reflections on them. In addition to workshops, we organize performances for which musicians play the Sound Crystal.

Saša Spačal is a visual and sound artist working with living systems. In her work she addresses the post-human condition, in which people no longer consider themselves sovereign but as entwined with all elements of the ecosystem. This results in more fluid definitions of what life is, and the fact that technology no longer extends in hardware and software but also in ‘wetware’ – the intergrowth of technology and biology – in hybrid phenomena that have their own mechanical, digital and organic logic. to have. In MycoMythological Machine she examines all these aspects. What if a microscope can tell stories. What would it say? How would it say? And how can people understand it? How can fungi help people to find new possibilities for the entanglement of people and other life forms in the ruins of capitalism? MycoMythological Machine is an installation that addresses these questions and plays with the production of knowledge beyond the scientific into the mythological realm of storytelling, where scientific phenomena are given their own sound and voice. Sonic myths produced by the MycoMythological Machine attempt to depict ways of being that do not (yet) exist and tune the audience to the sonic experiences of microscopic fungal networks. Microscopes tuned as a sound instrument translate images of microscopic fungi, mycorrhiza and other mocrobes in sound and sonic structures. The installation can be used interactively by visitors and used as an instrument in sound performances and workshops. Fungi and soil that serve as material are found in the park, so that the park itself becomes the research object of the installation.