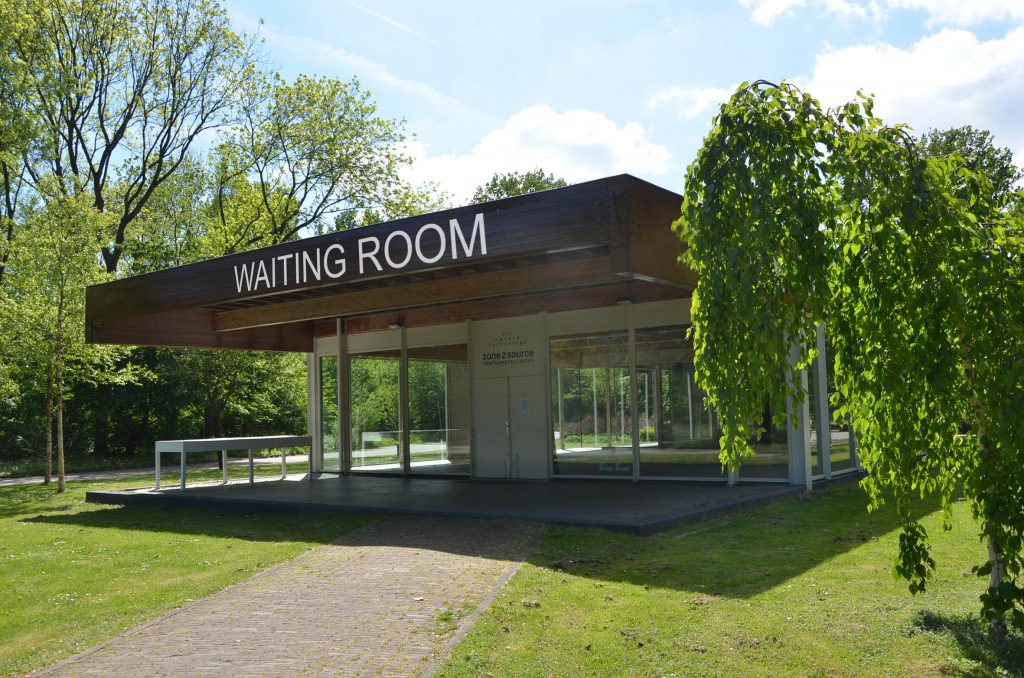 Waiting Room, specifically developed for our glass pavillion, is part of Gustafsson & Haapoja’s ongoing pursuit to explore the value systems of institutions as well as paths to a world where not only humans but life itself is central.

Waiting Room shows us the animal factory as the institution which is most symptomatic for the way our society relates to animals but renders them invisible in our living environments. Within this institution, there is a division of life between active life of humans, and the passive, bare life of non human animals. In the Amstelpark, visitors have a completely different encounter with the park animals, as opposed to their experience with the animals they consume as food. The symbol of Amstelpark as a human-made park, proposing a peaceful relationship between humans and nonhumans, is integral to the development of this project. Gustafsson & Haapoja play with this contrast between the park and the animal industry in their exhibition.

Waiting Room is a sound installation that brings an immersive soundscape played back from 16 speakers into an otherwise empty room. The soundscape is an audio documentation of the room in which pigs are waiting overnight before being brought to slaughter. Otherwise invisible, the animals become ghosts that haunt the society that denies their death. 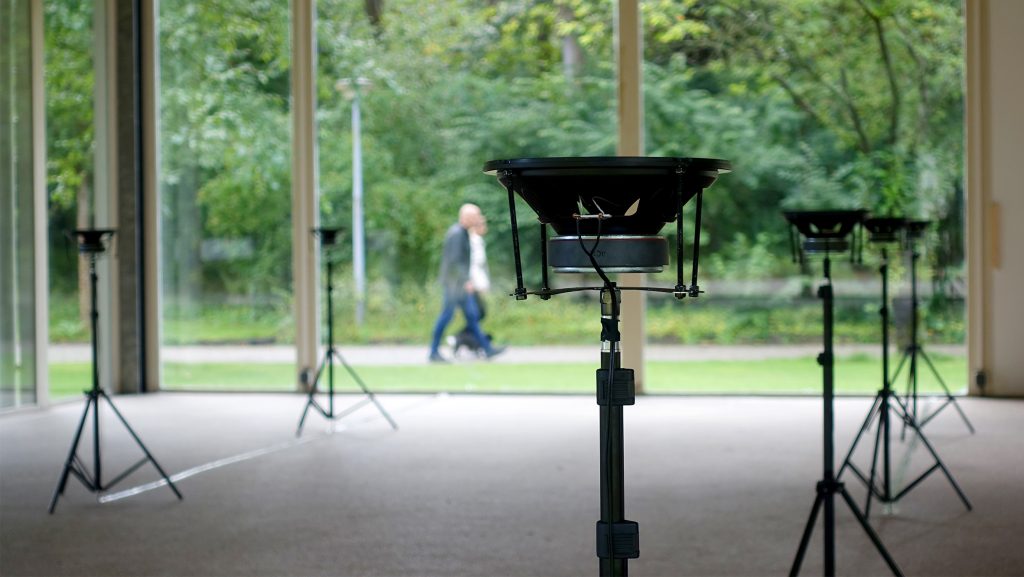 The sound installation will be accompanied by a video work Terror Archive. The archive is built around the words terror and terrorism. The word terrorism is used by the status quo as a way to describe forces that challenge its premises: for example, animal rights activism has been called terrorism. The aim of terrorism is to cause terror, fear. Terror refers also to the fear experienced by those subjected to state sanctioned violence. Terror Archive consists of words and concepts through which Gustafsson & Haapoja map out the mechanics of state sanctioned violence and the ways of making beings – human beings included – killable.

In Waiting Room Gustafsson & Haapoja play with the double exposure of the park and the livestock industry, and the simultaneous invisibility and presence of the industrial factory farm, proposing that it is more representative of our relationships to other life forms than the ideology the park presents.

The Waiting Room was also featured in the press: read more at Het Parool and Metropolis M (both in Dutch).

Gustafsson & Haapoja is a collaboration between visual artist Terike Haapoja and writer Laura Gustafsson. Their long term project explores problems that arise from the anthropocentric world view, and seeks to open paths for more ethical ways to coexist. By imagining histories according to other species, investigating how language enables othering, or mapping out the long history of animalization, Gustafsson&Haapoja bring forth questions regarding the impact of biotechnologies, industrialization or systems of knowledge production on the lives of both humans and other animals.

The work of Gustafsson&Haapoja manifests itself in exhibitions, stage work and texts. The Museum of The History of Cattle, first exhibited in Helsinki, 2013, was awarded with the Kiila prize for socially engaged art. The publication History According to Cattle was released in 2015 by punctum books and Into publications. The Trial, a participatory performance on the legal personhood of non-human animals had its premiere in 2014. The large scale installation and lecture series Museum of Nonhumanity opened in 2016 in Helsinki and has toured in Italy, Norway, UK, Taiwan and Denmark. Gustafsson & Haapoja received the Finnish State art council’s Media Art Award in 2016.

For Waiting Room they work together with Jaakko Autio, a sound designer based in Helsinki, Finland. He works with theatre, sound design and multichannel sound installations. In his artistic practice, Jaakko Autio aligns his yogi-practice and artistic phenomenas together in his interest in renewing perceptions of life.