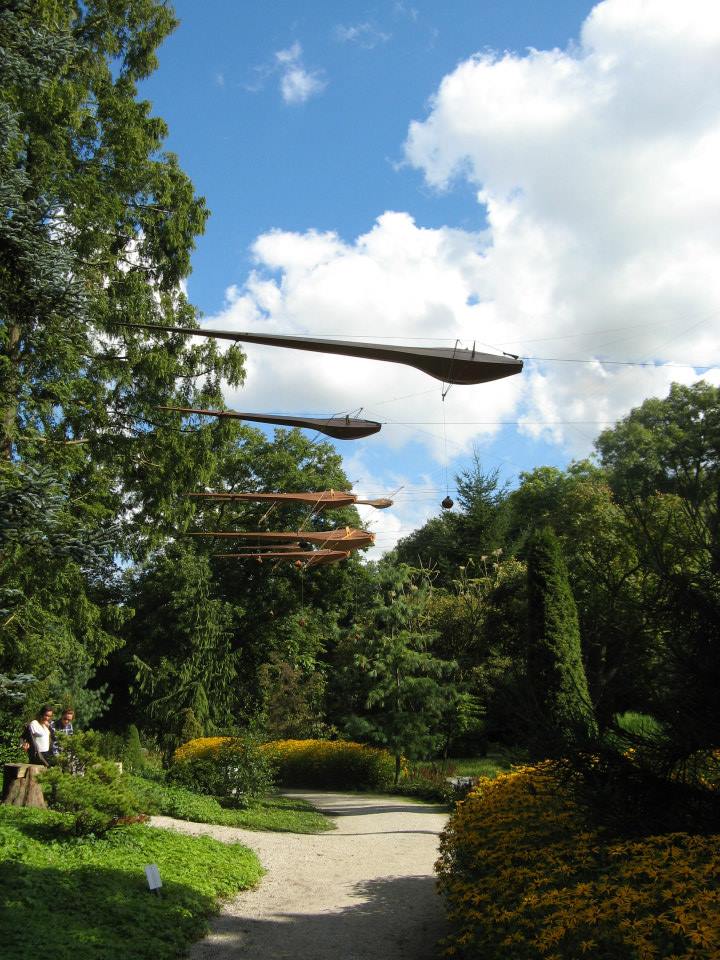 Wind Violins look like huge instruments which are hung in the trees and of
which the strings are played through the movement of the wind by the
branches. The installation consists of three violins, three cellos and
three bass instruments. Each instrument has a string which can be tuned in
harmony with the others. The horsehair bow moves over the strings of the
speaker cabinets by the nylon threads attached to the treetops, and held
in tension by the counterweights. The system is dependent on the nature
and the elements. Without the right wind they will not play. Patience and
acceptance of the public is brought to the test

In the work of Ronald van der Meijs, which takes place around the tension
between man and machine, culture and nature, natural processes are both
part and subject of the work. In his work he
explores how man relates to nature through the use of technology. In our
time there nature and culture are completely intertwined. What does that
mean for the state of the people who live in this technological world? In
machine-like installations van der Meijs lets technology communicate
with living matter and natural elements such as water, wind, rotting fruit
and evaporation
processes. The mechanism of the work is being directed by these natural
processes and can not completely be controlled in its rhythm, time and
shape. By creating an interaction between technology and nature contrary
to the expectations of efficiency, accuracy and speed that we typically
have of technology he explores a new symbiosis between culture and nature,
in which man and technology are positioned against nature but are an
integral part of it. The installations are characterized by both high and
low tech applications. The location, context, and the
passage of time and the effect thereof on the work plays an important role.