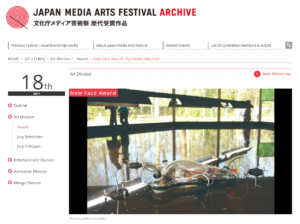 Ivan Henrique’s Symbiotic Machine project was developed in collaboration with Zone2Source. To its honor, the project snatched two awards: the New Face Award under the Art division from the 18th Japan Media Arts Festival in 2014 and the Honorary Mention by the Prix Ars Electronica in 2014.