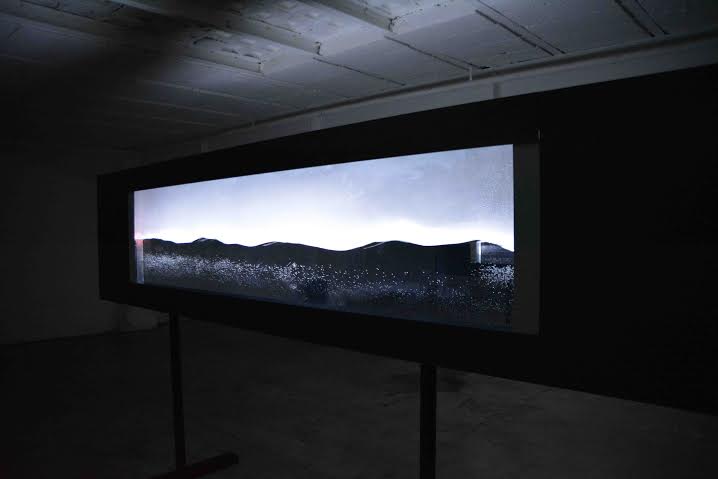 Labofactory is an interdiciplinary collective that consists of scientist Jean-Marc Chomaz, architect Laurent Karst and composer Francois-Eudes Chanfraults. Together they explore the cross-overs between the imagination of art and science.

Aquaplanet is a scientific abstraction, a planet fully covered by water without continents and without even underwater topography, just the waves and wind, a fiction to query the roaring swirl of the atmosphere and ocean, a world of complexity cast in silicone thru the imagination of our machines. Aquaplanet consists of an older work Fluxus and two new works 2080 and Red Shift in which phenomena from natural science are visualized to experience a prehistorical universum.

An installation with three meta-machines, Fluxus defines a new space, an Aquaplanet where the viewer retrieves the abstraction; an ocean of storms or calms, a primordial universe before the Pangea whose fine water writing of DNA retained the echo. Fluxus consists of a transparent tank, 3 meters long, 10 cm wide, 60 cm high, half filled with water. When hit, the surface of the water, stretched by gravity, oscillates. As with the string of a guitar or the skin of a drum, this oscillation will correspond to a series of notes each related to an integer number of waves in the tank. The meta-machines of Fluxus then become soft drums sounding on frequency of 1.71Hz and 1.31Hz. These frequencies are infrasound–inaudible to humans but visible by the movement of the waves. Musical composition considers Fluxus meta-machines as musical instruments playing their infra notes. The whole creates a soundscape both audible and visual, familiar and strange where gravity seems reversed, the air heavy with light and cloud, the surface of the water taking a metallic aspect stretched between two lines of light and lighting up when waves crash or break, producing ephemeral and chimerical figures, nonlinear and chaotic. Fluxus is made in collaboration with Gaétan Lerisson.

Red Shift is a purely analog augmented reality installation. By an optical process without any recourse to digital artefacts, it allows viewers to move in a space where the shadows abstract from the surfaces on which they are cast and appear as three-dimensional ghosts as if a fold in the universe had mixed objects and their negative imprints. These suspended planar forms move with the light source.

The 2080 installation, made in collaboration with Eline Dehandschoewercker, is based on the observation that, if the whole atmosphere was liquefied, then the planet would be covered with a layer of 2080mm liquid oxygen, the size of a human. Since oxygen diffuses more the blue light than the red it appears as a slightly blue liquid. In the installation a blue laser line 2080mm above the ground will encircle the entire Glass House and expend over the trees and all around and the public will be invited to continue the line so that 2080 becomes the materialization of the atmosphere fragility and sensitivity to local or global pollution.