The exhibition and performances take place in ‘het Glazen huis‘ and outdoors in the Amstelpark. 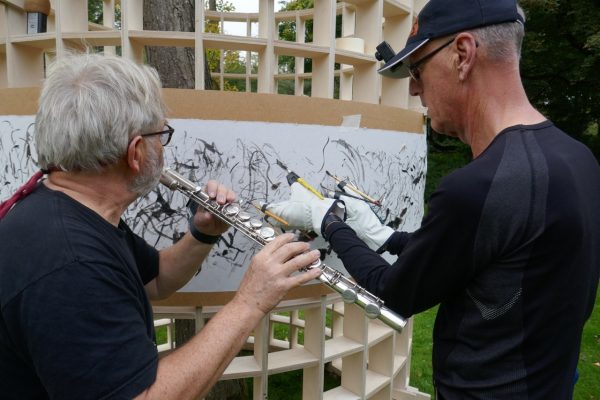 BirdScore – a collaboration between artist Jeroen van Westen (NL) and musician/artist Michael Pestel (USA) – is an interactive set of multi-media installations, a choreographed/scored performance work, interlocking indoor and outdoor, and a strategy for local environmental research and interspecies communication with birds. The title refers to the counting or ‘keeping score’ involved in birdwatching, but also to the various musical scores derived from listening to and performing with birds. BirdScore is a new step in thirty years of collaboration between Van Westen and Pestel focused on birds, bird sound, and bird extinction. The sound installation (BirdScape) for the Glass House is the point of departure, along with a related performance work (BirdGrid) designed to move throughout the park in a series of performances over a two-week period. Everybody is invited to join the research and exploration involved in the performances.

In both BirdScape and BirdGrid, the artists look at the world from the point of view of the nearly two hundred species of birds gone extinct since the time of colonial expansion in the 17th Century. Van Westen en Pestel seek to give voice to species we can no longer hear, and images to sights we can no longer see. They also consider the altered behavior of species in a cultural environment. Some raise their pitch and volume to compete with urban decibel levels, others no longer mate, or develop differently in and
out of the city. Based on pre-site inquiries with local birders, they choose four species of birds on which to focus attention. Nature is being approached here from different angles – science, art, music, and mundane culture. In each case, bird species are considered via four evolutionary principles: evasion, invasion, adaptation, and extinction. Not so much the birds themselves are studied here, but the culture-specific language employed to understand their place in our lives, and ours in theirs. Can we build a collective
memory of what is gone for ever? Art meets science in this speculative area to explore a way in which to develop a cross cultural awareness for the interactive dynamics between nature and culture as a possible prerequisite for a sustainable relationship with and between all forms of life and habitats on this planet.

About the artists
Jeroen van Westen grew up at an estuary in The Netherlands and it shaped his attitude as an artist. Originally trained in painting and graphic arts his focus already was at the relation between man and nature. A special research project by the Van Eyck academy in 1987 led him to discover his artistic position in and with the landscape. His goal always is to introduce cultural questions in functional transformations of landscapes. Since 2012 Van Westen is the curator for Vechtpark Hardenberg, realizing a dream that inhabitants, artists, ecologists, engineers and more collaborate in the ‘re-naturalization’ of a river. Parallel to the commissions there are installations, video’s, soundscapes, and performances. 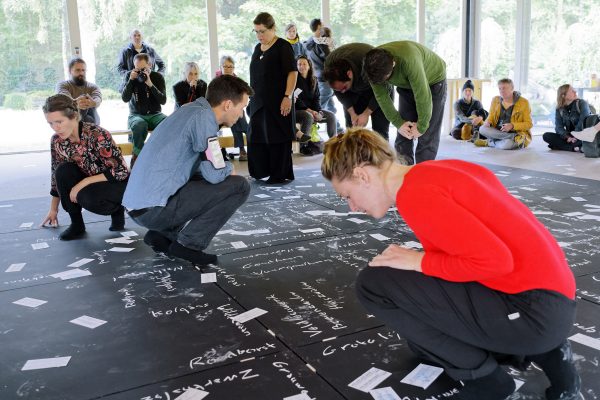 Artist and musician Michael Pestel has built large-scale architectural sculptures, multi-media installations, and has performed on diverse woodwinds and invented instruments, such as the Birdmachine, Violaire, Clarineticut, Broominette, and Pianotable, in concert halls, art galleries, aviaries and natural places throughout the world. His focus on bird sound over the past twenty years extends twentieth century French composer Olivier Messiaen’s Catalogue des Oiseaux into the realm of live performance with birds. An account of Pestel’s many years performing at Pittsburgh’s National Aviary are celebrated in David Rothenberg’s book Why Birds Sing and in a 2007  BBC documentary with the same title.