The work of Birthe Leemeijer is part of Exploded View 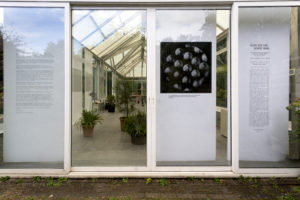 During our first collective stroll through the Amstelpark a recurring topic of conversation was plant intelligence and sensitivity. The question asked was whether we (people), with our limited vocabulary for unknown senses, were even capable of appointing and understanding plant qualities.

In 1905, the Austrian botanist Gottlieb Halberlandt (1854-1945) claimed that plants were capable of perception. According to Halberlandt, plants’ epidermal cells were convex and thus capable of sending images to an underlying layer op cells. His theory established a precedent in 1905, but is, in my opinion, still relevant today. Suppose it is true, that plants are capable of perception. Think of the enormous influence that would have on how we see plants and, just as important, how we relate to them.

In his book Plant Revolution, about how plants determine our futures, the Italian botanist Stefano Mancuso writes that while Halberlandt’s theory has been neither proven nor refuted, it could explain plants’ mimetic behaviour. Francis Darwin (1862 – 1929), botanist and son of Charles Darwin, endorsed Halberlandt’s theory, while another botanist, Harold Wager (1862-1929), used the epidermal cells of various plants literally as lenses.

Exploded View can be an enticing platform to (re)define the park from the plants’ perspective – plants as an acting and responsive organism. The potential for exchange between the participating artists as well as people from various areas of expertise (i.e. botany, biology, philosophy) offer numerous possibilities for collaboration and research.

From the very start of the study, I would like to apply Wager’s methodology. How did he create these images and what do they say about what plants actually ‘see’? Using his methodology, which images can we make in the park? What other conceivable possibilities are there to help people experience the plants’ perspective? How can exploding plants’ perception influence how we think about the future of the Amstelpark?

Birthe Leemeijer (Amsterdam, 1972) lives and works in Haarlem, The Netherlands. During her study at the Rietveld Academy and Sandberg Institute, Birthe won the Rietveld Academy Prize in 1996 and the Prix de Rome Base Prize for Art and Public Space in 1997. In 2016 she earned a professional landscaping degree at the Wellant College in Houten. Recent projects include ‘Vanishing Staircase’ in Utrecht’s Zocherpark, a ‘collapsed’ staircase that connects the Centraal Museum with the water on the Stadsingel. Created in close collaboration with ecologists, this work will integrate itself into the landscape as time goes by. In February 2019, Birthe will unveil her ‘Ice Fountain’ in the Northern Dutch town of Dokkum as part of Leeuwarden/Friesland Cultural Capital of Europe 2018. The fountain’s ice formations respond to weather patterns – at times thin, transparent and reflective, at times white crystals. Streams of water continuously seek out new paths, ice flowers form only to quickly disappear again, ice formations stacking, one atop the other. The wind, sun, rain and humidity all play a role in the fountain’s appearance, determining the size and visibility of the sculpture’s ice formations.