The work of de Onkruidenier is part of Exploded View

The research of the Onkruidenier within Exploded View questions existing frameworks derived from the genesis of a landscape in order to define our relationship with urban nature.

Looking at the history of the Amstelpark from 1972 on, many different landscape typologies are brought together. The park being a former Floriade terrain means that the current compositions of plant beds are in fact a reference to existing landscapes elsewhere. The plant bed as a subject, is the central focus in the project of the Onkruidenier in order to study the relationship between human, plant and landscape. From this perspective we’ll look at the original plant compositions of the park as a representation of different (inter)national landscapes. 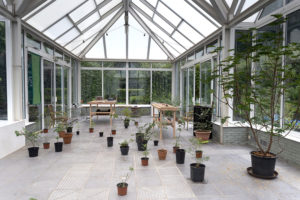 Fieldwork as research
At the end of 2018, the Onkruidenier started with preliminary research on the composition of plant beds in the Amstelpark. In particular we looked at the Heemtuin garden for native plant species. This garden was planted with over 400 endangered plants to showcase the typical features of some disappearing landscape typologies in the Netherlands. It functions both as educational garden and also ensures the position of native plant species. Almost 50 years later, how many of these species have permanently settled in the park, have disappeared or have naturalised? Have other wild plants established themselves in the garden? What new balance has emerged in this biotope? To what extent do these plants lead a nomadic or migratory existence? What stories are captured in plants and what can they tell us?

After the Floriade the Heemtuin keeps transforming towards a new type of landscape for which no definition can be made yet. The Onkruidenier traces back the echoes of these landscapes once introduced in the park. After our first explorations, an incomplete archive emerged that sketches a raw image of the found blended landscapes in the Heemtuin. Three of these undefined landscapes have caught our attention:

Tavern Refugium
The old walls of the ruin tavern ‘t Kalfje along the Amstel have been placed in the Heemtuin by the current and former ecological caretakers of the park. With the remaining remnants of the wall a new wall has been created. It now offers a safe space for fern and mosses typically found in Limburg. It has become a perfect hideout for insects, birds and little animals. Due to the old chalk in the mortar mixture holding the bricks together, it now creates this unique biotope.

Wild West Veluwe
The herbaceous landscape of river and dyke have been replaced in the Heemtuin by a local sand drift resembling the Veluwe. Like most places in Amsterdam the soil level of the Amstelpark has been raised with sand. It’s those Pleistocene sands that drift about in this new type of prairie caused by the large colony of rabbits loosening the surface. The almost non referential landscape creates a desolate mixture between a derelict urbanland and the wild west. Alongside the ruling of the rabbit castle the evening primrose is the undisputable Queen of this tumultuously piece of land.

Lawn Bonsai
An open spot in the forest or a grassland surrounded by trees and shrubs. Several times a year this herbaceous land is being mowed. The freshly cut material has been taken away to create poor soil conditions in order to achieve more biodiversity. This manual labour replaces the grazing job of deer or sheep. Numerous stubs of miniature trees, not bigger than a clump of grasses, are spread around like confetti in this land.

These three undefined landscape typologies are being presented to several experts by the Onkruidenier during Exploded View. How and are we in fact capable of defining and describing them as new biotopes?

Jonmar van Vlijmen and Ronald Boer are de Onkruidenier and live a non-existing profession. Their practice focuses on cultural actions of the classifying, cultivating, preparing and consuming of wild plants. Through site specific participatory fieldwork and research, their artistic practice develops new interpretations on the relationship between human and nature. Their research develops by including the users of the landscape as experts in the process. In their research-based practice, the central focus is the experiment towards new interpretations on nature and how the boundary between the realm of the cultural and the natural world can be dissolved.