The exhibition Exploded View shows the results  of a year long research of 9 artists and (landscape)designers concerning the Amstelpark between October 2018 and September 2019. This took place around various expert meeting together with researchers of CLUE+, policy makers, park managers, ecologists,geologist and park users, to reflect on urban landscapes from the perspective of their heritage. The goal is to develop new perspectives and visions on the park within a contemporary urban context. In september 2019 the results of the research phase were presented during these Park Explorations.

Read the Exploded View publication (pdf) as it was presented at the finissage on September, 20th, 2020. 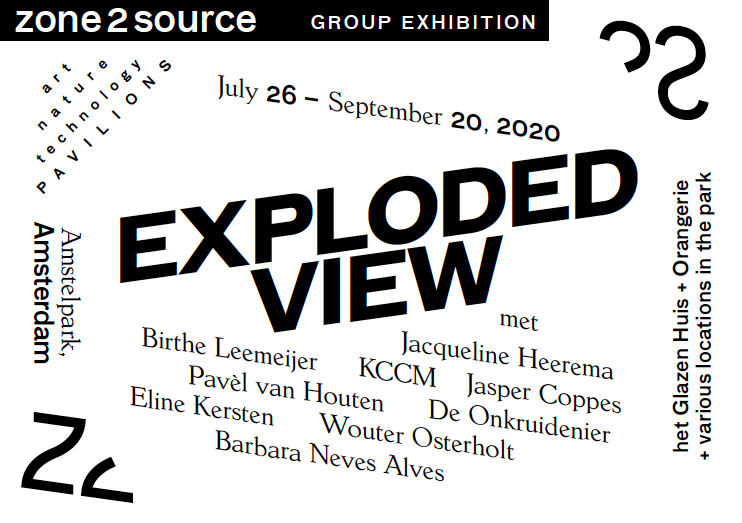 Exploded View (project website:www.explodedview.net) is an exchange between the Amstelpark in Amsterdam with the Parco Regionale dell’Appia Antica in Rome and was established in collaboration with  the Interfacultair Research Institute CLUE+ (Cultural Landscapes and Urban Environment) of the Vrije Universiteit Amsterdam.

The interdisciplinary research into the Amstelpark resulted in  art projects which will be presented and realised during an exhibition and public program in het Glazen Huis and various locations outside of the park in the summer of 2020. At a later date (probably early 2021) presentations of results of the research concerning the Parco Regionale dell’Appia Antica will be held in Arti et Amicitiae and the Allard Pierson (originally the 2 parts were planned in tandem in spring but due to Covid-19 both exhibitions were rescheduled)

De Onkruidenier Garden Sociology, Lexicon of an unknown landscape
In this project de Onkruidenier explores the Heemtuin area in Amstelpark for miniature forests that have stayed undeveloped as a result of human intervention with the aim to generate stories and a vocabulary for a new landscape that describes human-nature relations. They first will present the tree stumps in the Orangerie where they will install an oven to create a series of ceramic bowls, on which half way the exhibition the trees will be placed in the same meadows where they were originally unearthed. 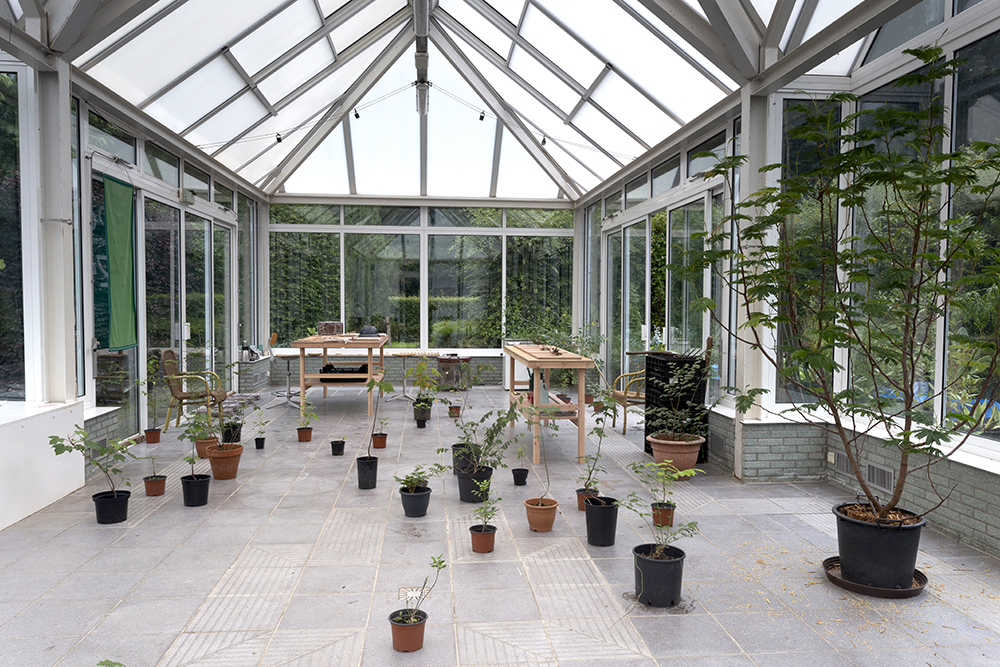 Eline Kersten, Flora of the Colosseum

Eline Kersten revives the lost vegetation of the 18th century Colosseum in Rome by using light and morse code and making visible and audible all the plant names in an installation in the Roman Pavillion in the Amstelpark and het Glazen Huis. 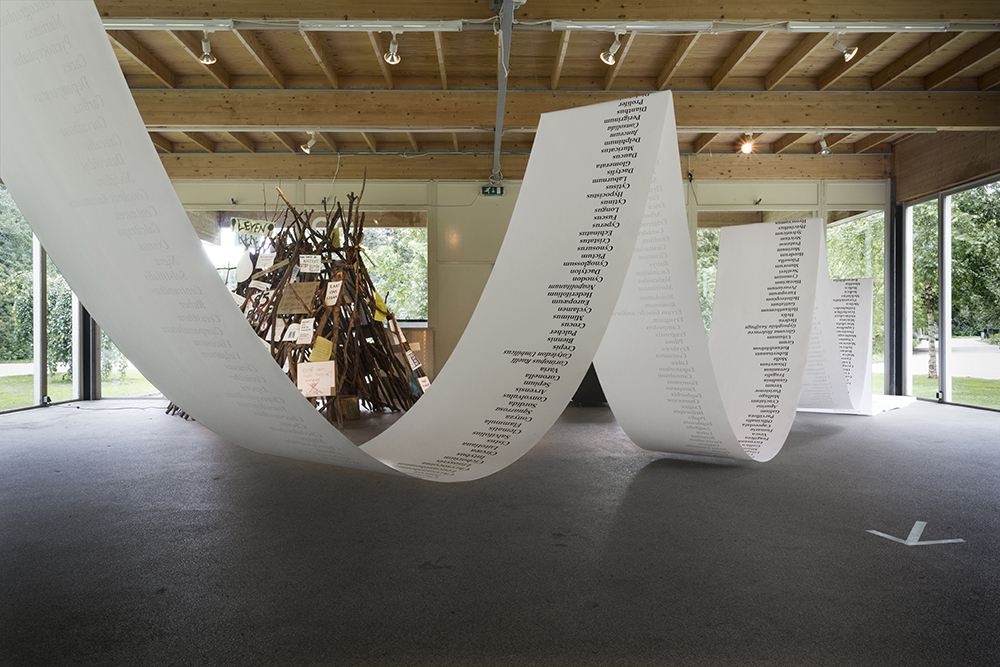 KCCM develops 5 audio plays that bring the park’s past to life from the memory of a selection of plants. The park’s history and memory are viewed from a different, non-human perspective by the residents of the park itself. The archive and location research that forms the basis of these sound works in development will be presented during the exhibition in the Glass House. Scenario’s for the five audio plays are explored in a workshop that KCCM gives during Expeditie Amstelpark aimed at young people up to the age of 23. 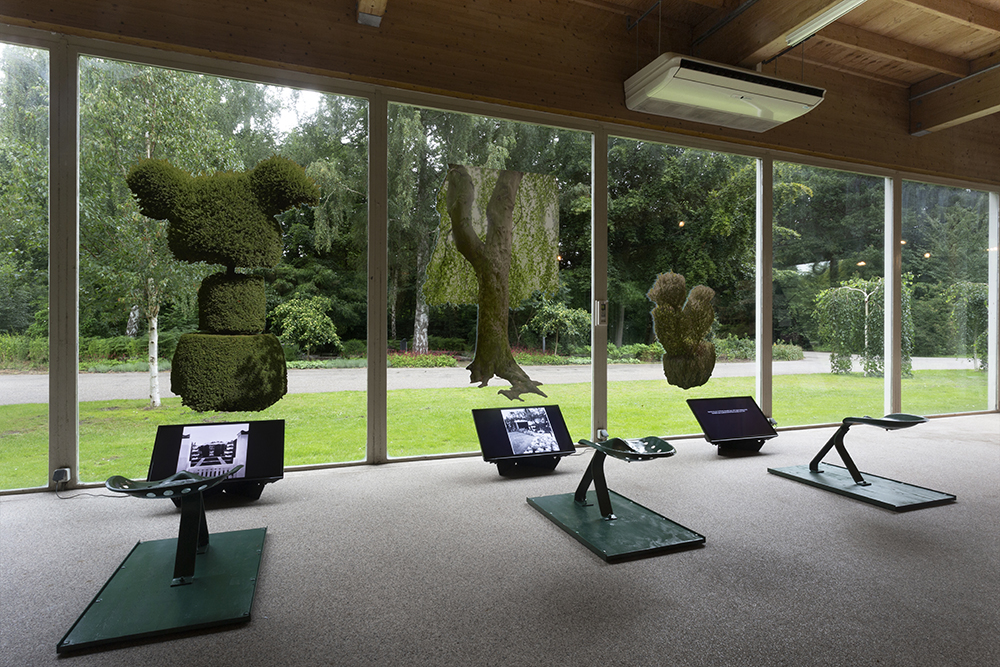 Jasper creates a sound piece opposite het Glazen Huis in the entrance to the Heemtuin that introduces voices of alien species such as the Greenlandic raven and sled dog, adding to the exotic nationalistic basis of this Floriade park. Introducing these creatures to the park can make us aware of the presence of non-human entities that have become vulnerable in the drama of global ecological collapse.
Jasper will also work on a new film as part of Exploded View exhibition. The production of the film will be part of Expeditie Amstelpark and he invites young people up to 23 to join his 2-day workshop. 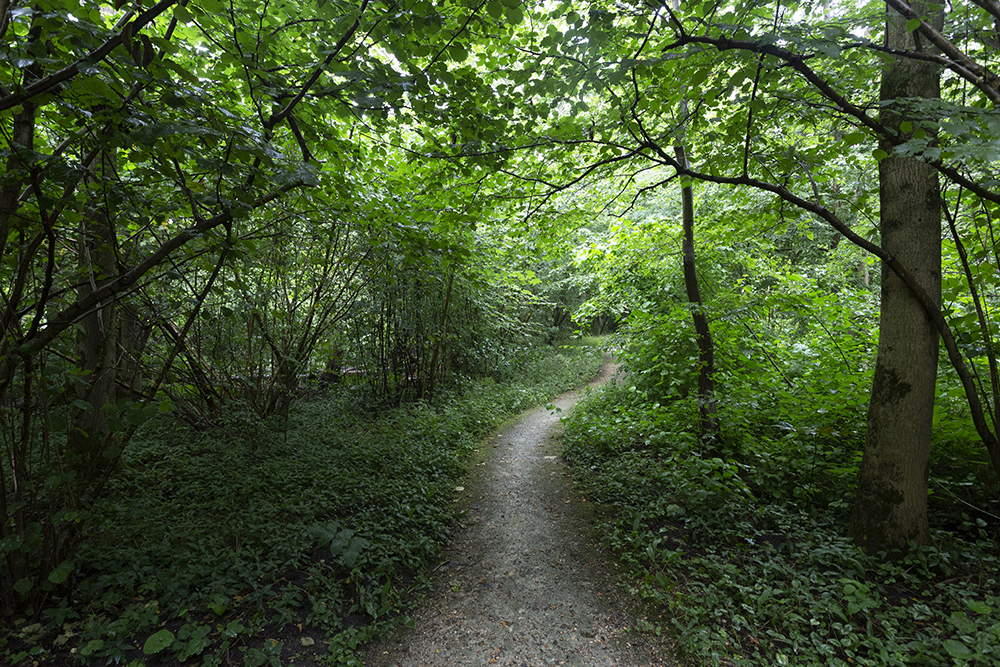 This video installation in the back space of het Glazen Huis shows a sequency of hands involved in taking care of the Amstelpark as well as the Parco via Appia Antica. The piece contemplates on the effort and failure of preservation and how this is practiced through  caring hands that resembles the “Pieta” of Michelangelo. 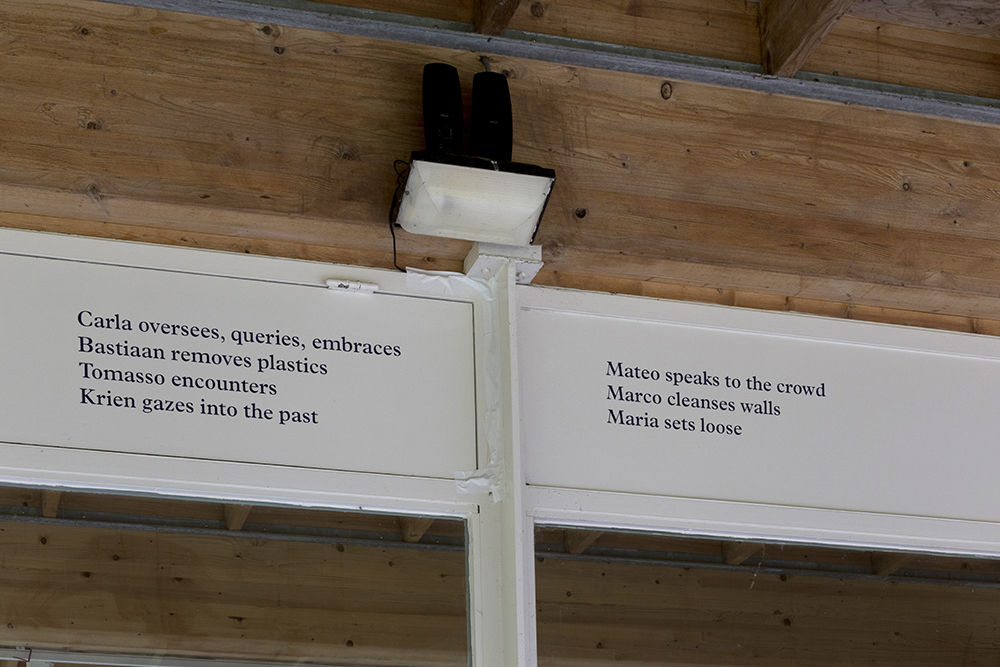 Birthe’s explorations started from a letter she wrote to the popular biologist Stefano Marcuso. Birthe tried to repeat the photographic experiments of Wager –which Marcuso refers to in one of his publication –  with epidermic cells in which Wager suppsedly proved in the early 20th century his hypothesis that plants also use the sense of sight to observe the world. Her letters and photographic and research material will be  shown in and on the Orangerie. 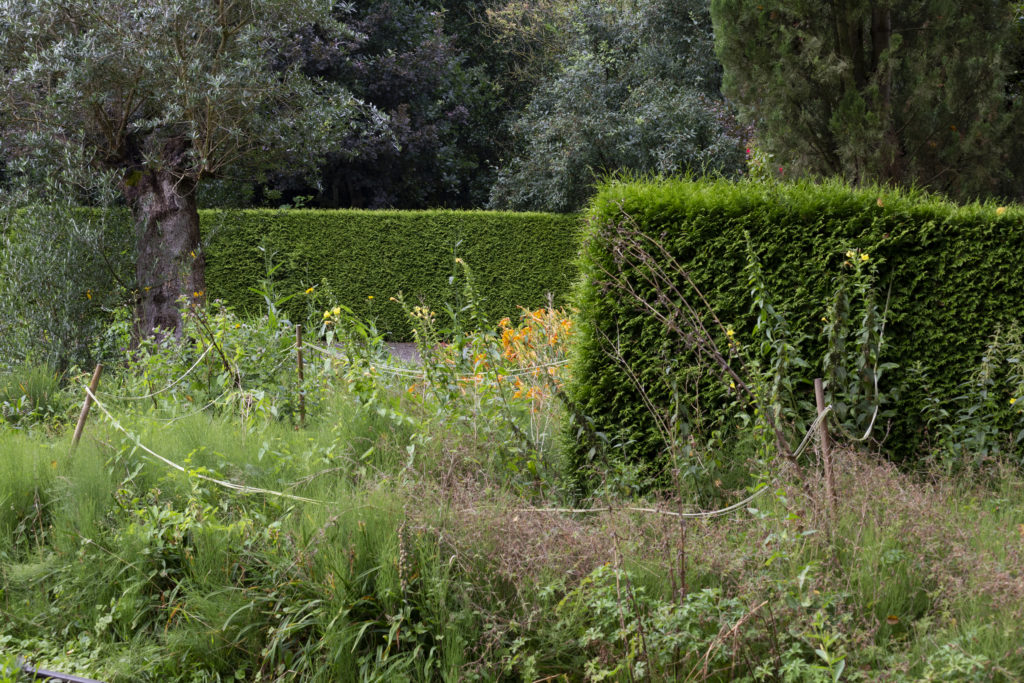 Researching the geological layers of the Amstelpark Jacqueline explores the internal life of soil in an installation in het Glazen Huis which includes material from 10 meter deep drilling samples that were done last year in the Land van Wording (a part of ‘original’land from before the Floriade) in the Amstelpark. She evokes an imagination how a more affectionate relation with soil can evolve through  awareness of a living and breathing earth.

Jacqueline Heerema will organise three public events around her work Breath of Soil(s). The events take place in the Glass House and on Land in Wording, the place where she drilled 10 meters deep. 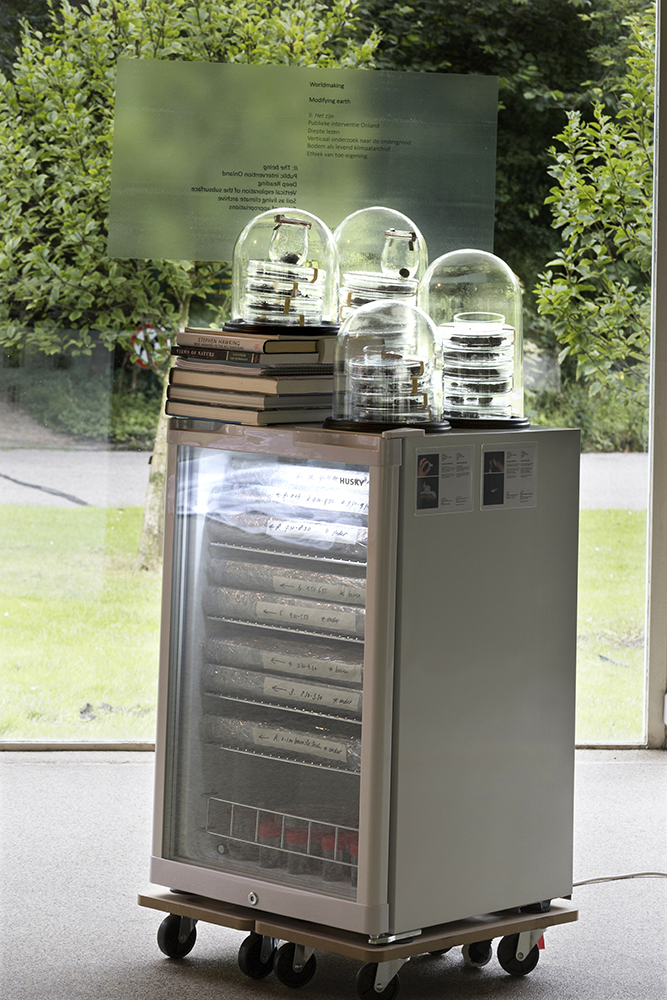 Barbara’s research and interventions over the last year in the process of maintenance of the Amstelpark by marking three areas that were left untouched by the gardeners, questions the tensions between change and preservation and our ‘civilized’ view of nature. It will result in a book with photo documentation and texts. 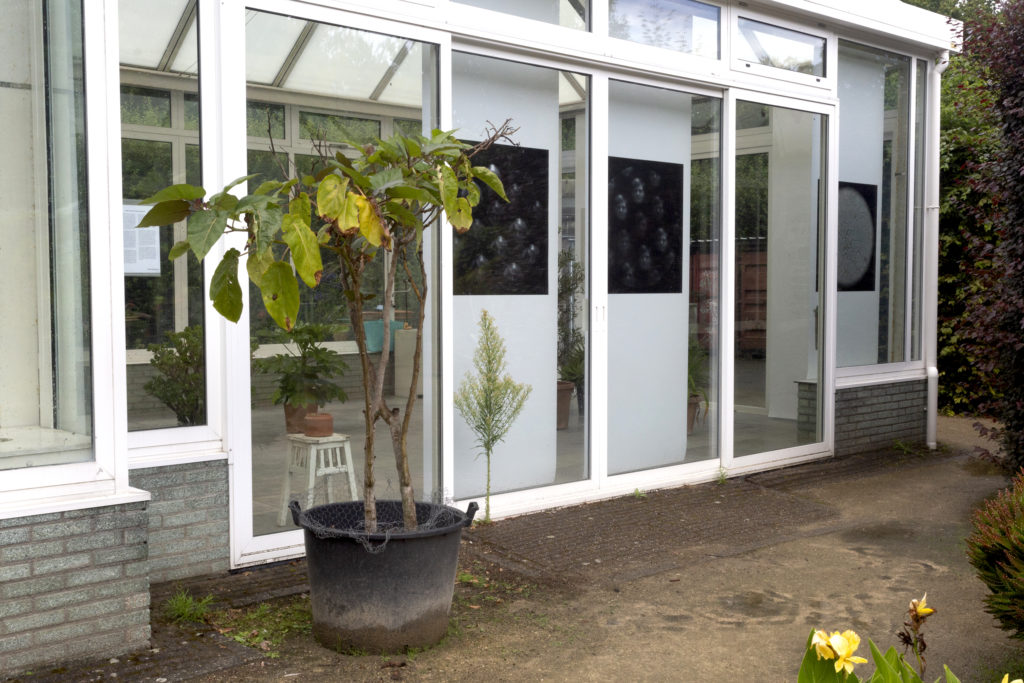 Wouter, noticing the lack of any sign of the  rising environmental consciousness in the Floriade of 1972, asks the question if a park can be a space for environmental activism and protection of nature in our time. Starting with an installation in het Glazen Huis he will rehearse together with 2 actors several film scenes in the park which are based on fragments of an archive on activists defense of trees since the 1970’s. 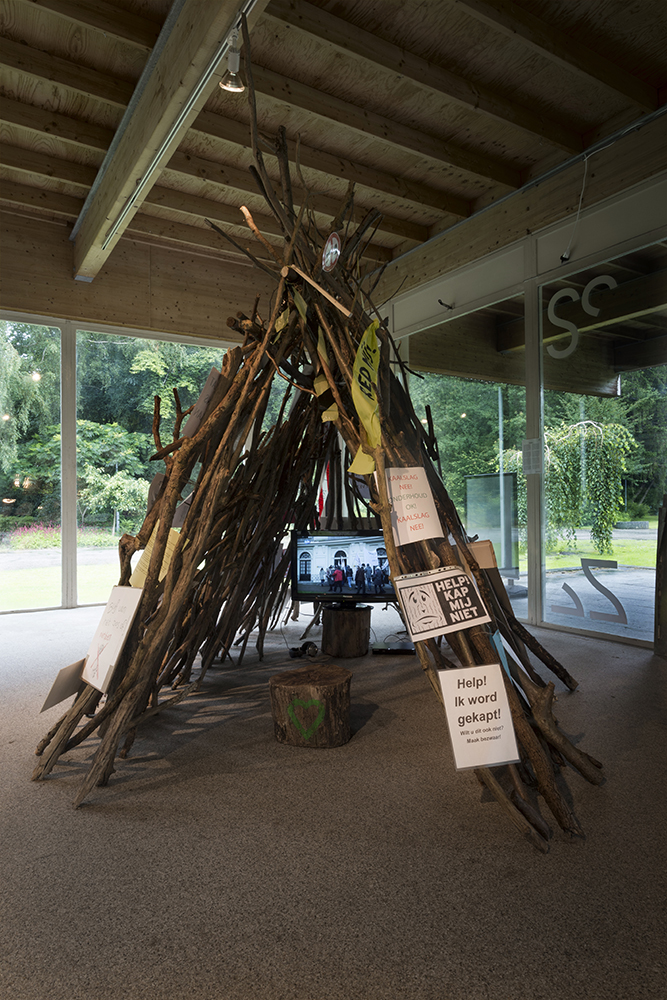 Read or download the Exploded View flyer, also including information about the new work by Jos Volkers and Ronald van der Meijs (with a joined opening on 15 August) and the Expeditie Amstelpark programme for young people.