Radiant Matter is the first duo exhibition of work by Marjolijn Dijkman and Maarten Vanden Eynde, an artist couple working and living in Brussel.  In this presentation old and new works are presented of each artist in which shared concerns are brought to the fore, bringing together objects, sculptures, a video and photos that explore the complex relation between the impact of the human on its environment and vice versa. 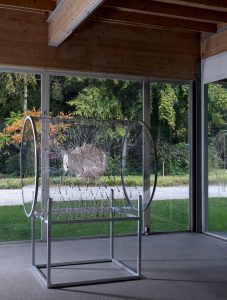 Radioactive isotopes, as remainders of the nuclear era, will most likely mark the transition between the Holocene and the Anthropocene, the era in which the human species has become the most important force behind transformations of the earth itself.  The Anthropocene challenges us to think in enormous time scales and distances which go beyond human experience. We are confronted with the fact that ungraspable natural processes and phenomena such as CO2 emissions have come to influence our daily life on many different levels.

In Radiant Matter works are on view in which the enormous and distant – radioactive radiation, CO2, asteroids, meteorites – are connected to the very small and personal, in the form of remainders and discarded objects of individuals. The works convey a shared reality but from a very personal perspective. 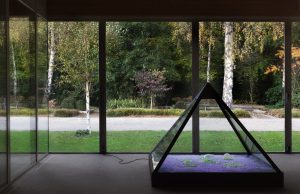 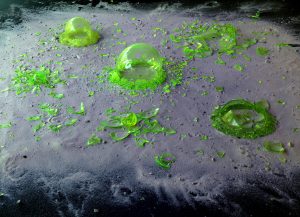 The publication Radiant Matter by Marjolijn Dijkman envelops a series of recent works that are tied together in their quest to analyze and reflect on the nature of scientific inquiry and the role of speculation, fiction and spiritualism. Their central topic evolves around the timeless fascination of humankind for the exploration of cosmic space, the position of our planet, and our human subjectivity in relation to celestial bodies.

In addition to an image essay, a conversation between the artist and editor Kris Dittel, the widely illustrated book includes texts by Ken Hollings, Maarten Vanden Eynde and Raqs Media Collective which further contextualise and inform her work and subject matters. Designed by Salome Schmuki and published by Onomatopee.

Marjolijn Dijkman develops work in which she considers the foundations of how we perceive and experience our surroundings – the conventions which underlie the comprehension of the world around us, and the human determination to interfere with and to influence the world around us. Informed by research and collaborations her working method interweaves and investigates collective narratives in relation to the public domain and the commons. For the past decade she has focused on projects relating to for instance urbanism, knowledge distribution and organization, (social) history museums, science or collective imagination. 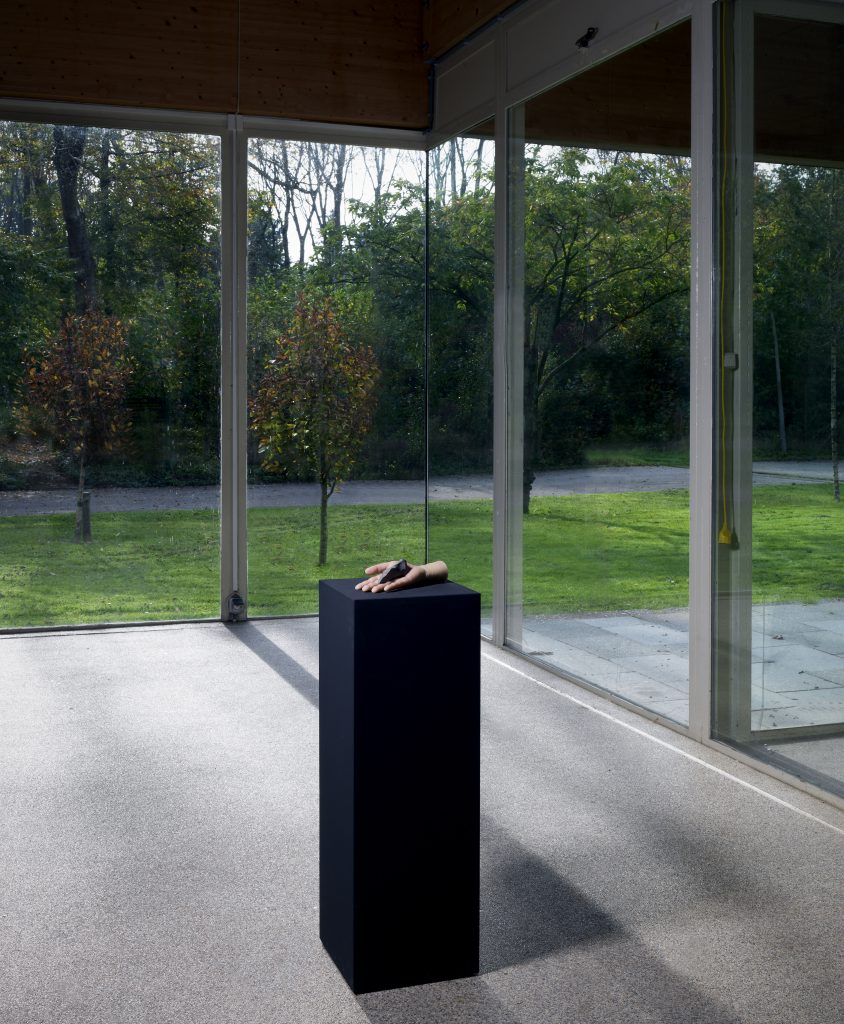 Her practice moves into the area of culture and science and can be seen as a form of science – fiction; partly based on facts and research but often brought into the realm of fiction, abstraction and speculation. As part of the development process and public presentations of the work she often opens up public debates around the topics and within the fields they address. Ranging from photographic archives and films, to landscape interventions and sculptural works, to participatory projects, her practice concerns itself with futurology, history, museology, anthropology, human geography, cosmology and ecology amongst others. Whereas some of the works are developed in dialogue with a specific context, other recent projects are ongoing with multiple outcomes. Given the scale and interdisciplinary approach of many of the works, assistance or cooperation – in every which form – is nearly always required for their realization.

Maarten Vanden Eynde
For more than a decade Maarten Vanden Eynde studies the current geological layer we will leave behind for future generations. The Anthropocene, a new geologic chronological term for the epoch that began when human activities started having a significant global impact on the Earth’s ecosystems, is his main area of interest. The execution or final form, as well as the location of production and presentation are strongly dependent on the concept and context. His works relate to different fields of study, social contexts and anthropological perspectives, ranging from marine biology to cosmology, and from the Congolese jungle to a booth on a commercial art fair. 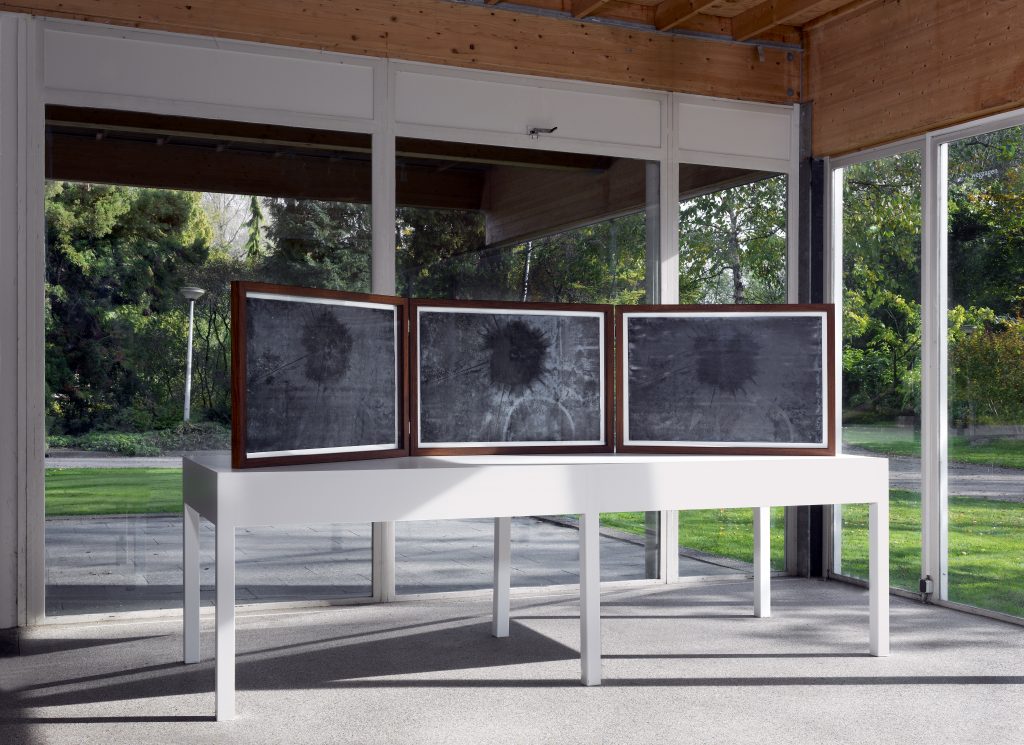 His practice is embedded in long term research projects that allow him to focus on a specific topic for many years and generate multiple works and presentation opportunities. From 2003 to 2014 he studied the concept of Genetology (The Science of First Things) and tried to define this non-existing opposition of the existing Eschatology (The Science of Last Things). Genetology’s main area of research is our fascination with time and its consequences: How will we look back to the past in the future? From 2008 to 2015 Vanden Eynde worked on a project and sculpture called Plastic Reef, a growing installation of melted plastic debris from the world’s oceans, dealing both with one of humanities most pressing pollution problems and the disappearance of coral reefs worldwide.  Currently he is investigating the influence of transatlantic trade of pivotal materials like rubber, oil, ivory, copper, cotton and uranium, on the evolution of human kind, the creation of nations and other global power structures. The project Triangular Trade traces back the origin of the different materials and follows their (r)evolutionary path as they are processed and transformed into ‘world changing wonders’.

Marjolijn Dijkman and Maarten Vanden Eynde are living and working in Brussels in Belgium and have been initiators of the artists initiative Enough Room for Space since 2005.