On 11 March 2022, the artistic research project called Machine Wilderness started in the oldest zoo in the Netherlands, ARTIS. The science programme is an initiative of Theun Karelse (FoAM) and Alice Smits (Zone2Source). Machine Wilderness was first launched in November 2015 during a symposium in ARTIS and was actually supposed to take place again from 12 April to 18 October 2020. Because of COVID-19 the programme has been moved to 11 March – 24 June 2022.

In Machine Wilderness, eight artists investigate the relationship between technology, humans and nature in a zoo setting. How does artificial intelligence (AI) play a role in imitating the thinking capacity of a human in nature? Can technology also be designed in a way that it does not only serve humans, but also other living organisms? The artists will work with these questions and in addition to their research, they will take the visitors with them through workshops, lectures and expeditions in ARTIS.

Nature and technology are often seen as two opposites. But to what extent is this true? In its contemporary way Machine Wilderness looks at whether these two terms can reinforce each other and help each other to get closer to life on earth. This makes ARTIS the right meeting place: bringing nature closer to people and, in an inventive way, initiating the debate on how people value, understand and treat nature. For ARTIS, (restoring) contact with all life on earth is paramount.

The participating international artists Driessens & Verstappen, Antti Tenetz, Heather Barnett, Ivan Henriques, Thomas Thwaites, Špela Petrič and Ian Ingram will be staying in ARTIS for a few weeks from 11 March to 24 June. They will work at various locations in the park and will also have a studio and presentation space at their disposal. Through experiments, they will try to get closer to the life of other creatures and hope to reveal hidden worlds. Visitors can see the artists at work in the park and talk to them. The artists can be recognised by their artist’s jacket. During their residency, they will also hold an open studio or workshop for the public on Wednesdays between 3 and 5 pm. See below for the full schedule.

On Friday 11 March from 5 to 7 pm, the opening of Machine Wilderness took place in the Planetarium in Artis. During the opening Erik de Jong (former ARTIS professor of Culture, Landscape and Nature), Alice Smits and Theun Karelse introduced the programme. This was followed by presentations by Driessens & Verstappen, Špela Petrič and Ivan Henriques. And on 24 June 2022 from 11 – 17 hrs the final presentation with demonstrations of all projects and a number of lectures and talks will take place in the new Groote Museum (Hoofdgebouw) at ARTIS.

Goatman: an attempt at a goat
May 31, 8pm – 9.30pm
During this evening, Thomas Thwaites will take us through his research into stretching our human perspective. During the programme, Thwaites will talk to Professor Leonie Cornips, who is a linguistic researcher and focuses on animal language. Specifically, how cows communicate with each other and with people. Can you understand cow language? Find out during the cow language quiz!

Artist duo Driessens & Verstappen will observe terns, meerkats and alpine ibex with the help of artificial intelligence and produce dream images. Antti Tenetz brings a machine, which so far only knows the arctic animal world, to the exotic world of ARTIS. How does artificial intelligence deal with the unknown? Heather Barnett turns our gaze to the ants in ARTIS and their clever collective behaviour. Ivan Henriques builds a sculpture with microbes in collaboration with ARTIS-Micropia. Thomas Thwaites will try to design a harmless vehicle. Špela Petrič wants to find out what hidden labour is needed to keep the ecosystem in ARTIS vital and resilient. And an Ingram will make a robot that acts as a translation machine between the Victoria Crown Pigeon in ARTIS and overflying city pigeons. All information about the artists is on the ARTIS website in Dutch or on the Machine Wilderness website in English.

Driessens & Verstappen
Maria Verstappen and Erwin Driessens like to work with technology that is not entirely under the control of the artist, like the Spotter. The Spotter is an artificial intelligence that looks for animals and makes its own ‘dream images’ of them. For the Spotter, ARTIS is a paradise of unfamiliar shapes and colours, but Maria and Erwin have chosen four favorite spots: at the Mandrills, Inca terns, Alpine ibex and Meerkats. ARTIS of course has a long art tradition of observing and portraying animals: Natura Artis Magistra. The spotter also looks at the animals and slowly forms its own impression of them. Maria and Erwin document the development of that image in a video. Read more about their residency here.

Antti Tenetz
Antti lives in Finland and calls himself an ‘artist/naturalist’. He studies animals like wolves, reindeer, birds of prey and salmon, but also accompanies scientific expeditions as a guide through the landscape. Antti proposes to do an experiment in ARTIS with an artificial intelligence which is taught to recognise only Arctic animals. He then will introduce it to inhabitants of ARTIS. What happens when a computer that only knows reindeer and salmon, sees elephants and crocodiles? How does this relate to drawings by people who had never seen such animals, but only heard of them in stories from travellers, like the famous drawing by Dürer of the rhinoceros? Does naming species after something we already know affect our view of them? Is a sea lion really like a lion and a flying fox like a fox? Do we humans understand the unknown by comparison with the known? Read more about their residency here.

Heather Barnett
Heather Barnett (living/working in London/UK) is an artist who works with interfaces between art and science. Heather is interested in emergent behavior of organisms such as slime molds and ants. As part of her residency at ARTIS, she intends to work with ‘non-collection’ animals in the park, especially ants. Through small on site interventions, she will make ant populations and their behaviour visible in the zoo. Heather has also developed workshops in which people playfully explore the organisational skills of ants and slime mold populations. The emphasis in her residency will be on enabling empathy for complex, collective behaviour. By focusing on the ‘voluntary’ animals in ARTIS, she wants to enlarge the frame through which our gaze is directed to determine what we perceive as special. Read more about their residency here.

Ivan Henriques
Ivan wants to build a living sculpture for Machine Wilderness, together with microbes. This is not entirely new to him. He has also worked with living organisms in previous works. With this, Ivan tries to explore new ways of interacting and living together; new forms of symbiosis. He often merges biological and technological elements into a new kind of creature. He has been working with lab assistant Nele de Klerk from ARTIS-Micropia since October 2021, learning about microbes from her. The shape of the sculpture will change over time with the help of microbes. From strictly geometric by man, to fluid and organic by microbes. The sculpture is not made by Ivan alone, but is a collaboration between man and microbe, and the microbes themselves. Which microbes are eligible to build the sculpture together and what do they need to do so?

Thomas Thwaites
Thomas is a designer from the UK who often works in the form of experiments, like taking a holiday away from being human in his GoatMan experiment in which he tried to live like a mountain goat in a herd for a while. ARTIS is a patchwork of overlapping animal-, plant- and human territories. For Artis Thomas will attempt to design and construct a Harmless Car. Harmless to every living thing, everywhere, in perpetuity. Can we make a car wheel that is harmless to an ant? How can we make a car chassis from material which does not harm an ecosystem? We use ‘attempt’’ because obviously this harmless object is an impossibility, but in making the attempt the artist wants to discuss the social questions of how harm from human activity is apportioned amongst other animals, what harm is acceptable and so on. In Artis Thomas wil weave a monocoque (construction technique without bracing parts) chassis for a full size family car out of wicker (reeds) as a first component to make a Harmless Car. He will invite passers-by to assist with the weaving while engaging people in the underlying questions of the project.

Špela Petrič
Špela is an artist with a background in biology working in the Netherlands and Slovenia on questions concerning the relationship between humans and other organisms. Her recent interest in artificial intelligence and automation has compelled her to investigate sites of infrastructural care as places of intimate, embodied relations with intelligent machines. With a particular interest in plants and their carers (Ton Hilhorst), she will observe the day-to-day processes of maintenance to map the abstract machine that allows living beings to thrive outside their native habitats. The aim is to develop a participatory action that invites the audience on a performative ethnography of the ARTIS life support infrastructure, which will conclude in reflexive conversations about the entwinement of bodies and machines in the area of care.

Ian Ingram
Ian Ingram is an artist from Los Angeles with a great passion for both animals and robots. He builds small, sophisticated robots that try to communicate with wild animals, like squirrels, lizards or the pigeons in ARTIS. It is not always clear whether the animals understand the robots, but their attempts at communication are inspiring and give insight into relations between animals, robots and people. He wants to work with pigeons and build a machine that acts as a translator between the majestic Victoria Crowned Pigeon that nests in the tropical greenhouse at ARTIS and its distant cousins, the ordinary city pigeons that visit the park. 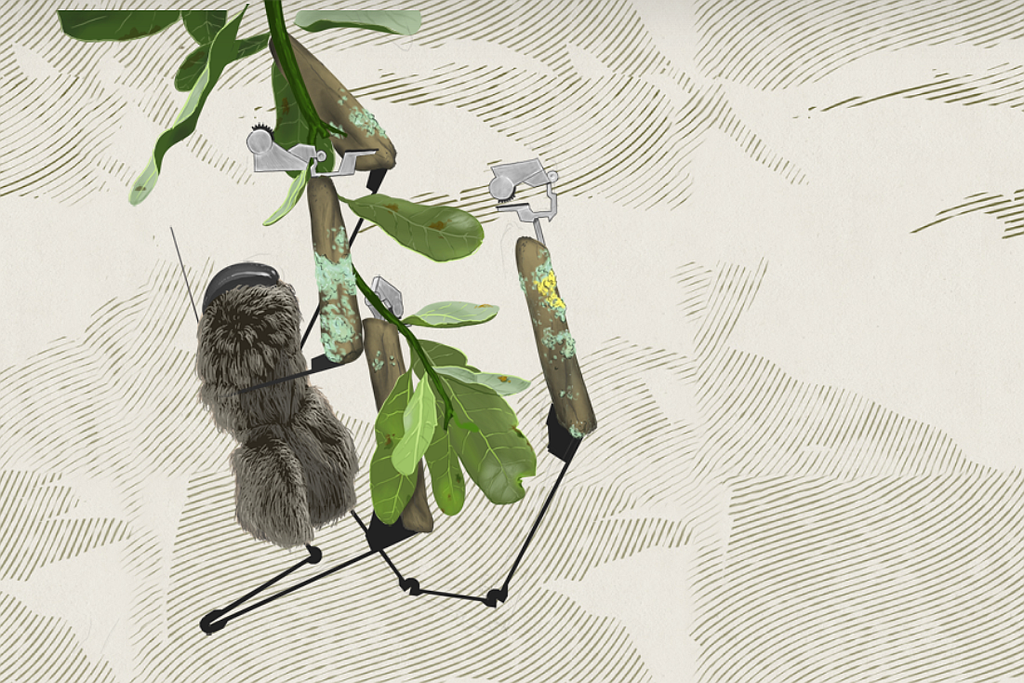 In 2015 Machine Wilderness started with a symposium in ARTIS and has since been followed up with (international) exhibitions, lectures and expeditions at the interface of nature, technology and art. Now Machine Wilderness returns to ARTIS and organises a joint residency programme in which eight artists and designers will research the relationship between technology and living organisms (animals, plants, microbes) in ARTIS. They will each work for a few weeks in the park on a new experiment, together with animal caretakers, the public and the other living organisms in ARTIS. ARTIS has been researching the relationship between art, nature and science since 1838. Machine Wilderness explores this in a contemporary way. Read more about Machine Wilderness here.

Machine Wilderness is organised by:

Machine Wilderness is made possible by: