An exhibition by Neal White, Tina O’Connell, Uriel Orlow and a film program by May Adadol Ingawanij & Julian Ross including work by Riar Rizaldi and Pam Virada.

In collaboration with Deep Field Project at CREAM (University of Westminster, London and University of Reading, UK).

Perfect Nature: Amstelpark Test Site is a group exhibition and field experiment organized in collaboration with Neal White of CREAM/Westminster University in London. This project explores how local and indigenous knowledge relates to scientific methodology. What is the impact that scientific and visual classification systems of the natural world have on our relationship to flora and fauna? The artworks presented explore scientific representations of nature – which we encounter for example in the field of international trade in plants, plant medicines and soil – alongside local cultural knowledge in which other relationships to the natural world appear.

What Plants Were Called Before They Had a Name (Guatemala) (2017)
What Plants Were Called Before They Had a Name (Guatemala) is a photo and film installation by Uriel Orlow about the epistemological violence of colonialism which contributes to the disappearance of indigenous knowledge of plants. European colonialism was both preceded and accompanied by expeditions that aimed at charting the territory and classifying its natural resources, in turn paving the way for occupation and exploitation. The supposed discovery and subsequent naming and cataloguing of plants disregarded and obliterated existing indigenous plant names and botanical knowledge and imposed the Linnaean system of classification and its particular European rationality. In What Plants Were Called Before They Had a Name (Guatemala) Orlow connects historical ethnobotanical resources with contemporary encounters with different indigenous spiritual guides of the Guatemalan Altiplano and elsewhere, as a way of recovering memory and linguistic presence. Coming across a 1970’s publication by the Instituto Indigenista de Guatemala on medicinal plants in which all the plants are labeled in Spanish, the artist embarked on a journey to recover the loss of indigenous languages and consequently of cultural diversity and to counter the continuing epistemic violence within botany and science. The project revisits the publication and attempts to imagine a different history but confronting it to the many languages which populate Guatemala: Mayan spiritual guides write the plant names in their languages onto the pages of book.

The work stems from research carried out by Uriel Orlow in different places in the world: through films, photographs, installations and sound, the artist proposes the idea of the botanical world as a stage for complex and articulated political dynamics. Uriel Orlow’s practice is research-based, process-oriented and multi-disciplinary including film, photography, drawing and sound. He is known for single screen film works, lecture performances and modular, multi-media installations that focus on specific locations and micro-histories and bring different image-regimes and narrative modes into correspondence. His work is concerned with residues of colonialism, spatial manifestations of memory, blind spots of representation and plants as political actors.

Truth to Nature (2022)
In the back space of the Glazen Huis, a new work by Neal White & Tina O’ Connell will be developed throughout the exhibition as the result of their 2-month residency in Nieuw en Meer Amsterdam. Truth to Nature (2022) currently combines videos about loss of biodiversity with nature museum collections and soundscapes of nocturnal life with the post-industrial landscape outside Amstelpark. A three meter reflective globe based on the Unisphere that was part of another world exhibition, is a research tool situated in the gallery and will be used during field work sessions.

Made in Amstelpark, the video features images of both recently ‘extinct’ moths and newly discovered moths in Northern Europe and the Netherlands. Changes are occurring due to climate change, and the constant human destruction of habitats, increasing levels of light pollution and removal of wild pasture.

The images in the video were created by the artists from archives in natural history museums, that hold specimens of moths. The first of these images use ‘tufting’ techniques to literally draw moths in day-glow wool – the use of the artist’s skill to capture a ‘perfect’ specimen was used in all early scientific atlases of plants, insects etc. Then photography is used to create spectral images on site in Amstelpark.  The technique of light painting used in this video work refers to claims for the ‘objectivity’ of the camera. In this respect, the camera replaces the artist in scientific imaging, as scientists initially believed it would be more truthful. Today algorithmic and genetic code not only challenge how we see nature but also how we understand how life itself is manipulated by science and technology. The two of moths in the video, one seen by A.I. and the other genetically manipulated, remind us that we are now changing our relationship to nature in new ways.

The video is shown alongside an audio soundscape and responsive light installation of the nocturnal habitat of Amstelpark, created using specialist recording techniques to capture the echo frequencies of bats – slowed down to be audible to the human ear. The bats have long been the apex predator of the moth, but the lights used in the installation make direct reference to the urban greenhouses that are now creating perpetual daylight conditions and changing multiple habitats in the landscapes beyond our cites.

Weaving together folk tales from the coming-of-age film trilogy of Taiwan auteur Hou Hsiao-hsien, and her grandfather’s supernatural encounters and memories, Pam Virada delineates the routes of the Chinese diaspora in Asia through mysterious tales passed down over generations. ‘Casting a Spell to Alter Reality’ was commissioned by the Asian Film Archive, Singapore, as part of its Monographs series, featuring audiovisual and written essays on Asian cinema. Pam Virada (b. 1993, Bangkok, based in Amsterdam) is interested in the notions that lie between the realms of architectural space, memory, and mnemonic devices. Her practice often explores the concepts of personal and collective memory, colliding subjective realms with physical spaces, the circumstances in-between “placement” and “displacement,” fact and fiction.

On May 5th, 1923, the Dutch East Indies government celebrated the opening of a new radio station in West Java called Radio Malabar. In March 2020, the local Indonesian government announced plans to reactivate the station as a historical site and tourist attraction. ‘Tellurian Drama’ imagines what would have happened in between those years. Riar Rizaldi’s fable reckons with the vital role of mountains in history; colonial ruins as an apparatus for geoengineering technology; and the invisible power of indigenous ancestors. The narration is based on the forgotten text written by a prominent pseudo-anthropologist Drs. Munarwan.

During their residency Neal White and Tina O’Connell will use Amstelpark for research and experiments into the wider laboratory landscape as a ‘test site’. Through experiments and interventions, alternative forms of documentation and a range of participatory events, their aim is to create ecological ‘assemblages as  different forms of knowing about nature. One thread links the hidden nocturnal life worlds of the park with sites such as the flower auction FloraHolland, where an artificially illuminated world is inhabited by unseen night workers. By day, the mobile Unisphere will mark out sites of exploration in the park for invited and incidental visitors to share their own insights, as a scientific or a local observer of nature. Weaving together these threads into an immersive installation in Het Glazen Huis, the public and artistic documentation, recordings and material interpretations will form part of a closing public event and assembly, titled Ecological Futurisms at Amstelpark that will link familiar forms of knowledge about nature, from the scientific fields, atlases, archives and databases, with cultural and situated knowledge of the local environment.

An artists’ publication will be developed through the residency by Neal White and Tina O’Connell with The Deep Field Project based at CREAM and published in conjunction with Zone2source. Neal White, Uriel Orlow and May Adadol Ingawanij, along with Deep Field Project, are based in CREAM – a research centre at University of Westminster in London. Tina O’Connell leads Artlab, a research unit based at University of Reading and Julian Ross is part of Re-Centre at the University of Leiden.

The film curation by May Adadol Ingawanij and Julian Ross devotes itself to Southeast Asian artists who connect ecology with spirituality. During the exhibition work by Riar Rizaldi and Pam Virada is shown at het Glazen Huis, and on Thursday 9th of June, 2022 the film event Animistic Apparatus takes place. 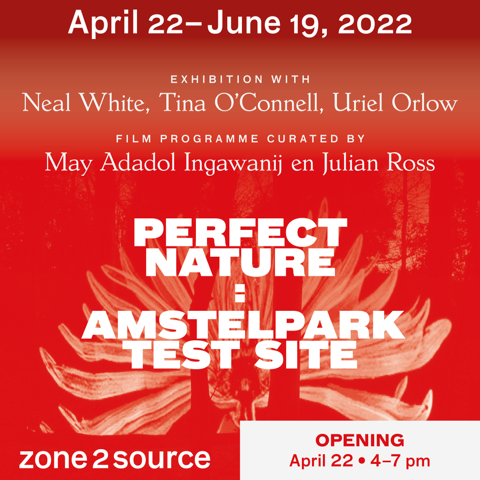 Ecological Futurisms, CREAM – Centre for Research and Education in Arts and Media, and University of Westminster