Building as Being – Animal pavilion workshops by ZOOOF & Esmee Geerken

For the Shadow Floriade, Zone2Source invited ZOOOF (Zoo of the Future) and Esmee Geerken to give a series of workshops about building for and with the animal inhabitants of the Amstelpark. Together we will investigate the history and future of the Amstelpark, where animals find a semi-temporary and voluntary place to live in growing pavilions. Listen, research and build with us!

What are Animal Pavilions?

For the Shadow Floriade, we explore the history of the Amstelpark. We start by listening and observing the animals and the half-fallen Floriade pavilions. How did the Floriade park, laid out in 1972, evolve into its current form through the interactions between squirrels, park rangers, grass, walkers, worms, geese, politicians, seals, walibis, millstones, trees, asphalt and all the other ‘park actors’? And what happened to the seals…? Seals? Yes, Else and Dolf!

From here we look ahead; what could the Floriade look like in 50 years, returning to the Amstelpark? And could this Floriade, instead of being built in ‘no time at all’, also start growing now, without being able to predict exactly what the Floriade of the future will look like? In the construction workshop, we will set processes in motion, to let Animals Pavilions of the future grow from the interaction between materials and voluntary other than human park inhabitants.

What agency and freedom of choice do park organisms have, in their relationship with the Amstelpark, through the construction of pavilions, shelters, mosses and nests? Can we build from the interactions between stones, sun, wind and water, can we build with each other – plants, animals and people, with pavilions unfolding themselves in time?

Listen, research, build and design along with the animals of the Amstelpark: through Wildcamera observations, Citizen Science, Building-with-Animal-Pavilions and dreaming of the Floriade of 2072.

You can register for the workshops (preferably all three) via Eventbrite.

Go and do some research yourself in the Amstel Park: collect stories about the history of the Floriade Pavilions of 1972, the stories of the former animal inhabitants of the park (such as the seals), and observe which animals live there now, and how they have made a habitat for the crumbling pavilions… During the first workshop we build on this research, with the help of citizen science tools. 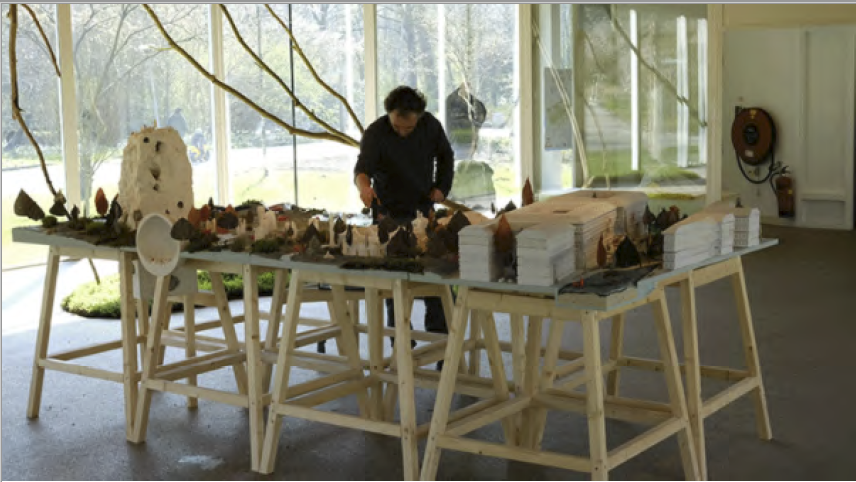 About Building as Being

What do people build for, what does it mean to build, how has building evolved over time, and how can we build sustainably for the future? Building as Being explores these questions in collaboration with architects, designers, ecologists, earth scientists, artists and the general public. Forms tend to grow through the principle of self-organisation, where order emerges from chaos, without a master controller.

The designer collective ZOOOF is building a pavilion around the habitat of animals. During the Zoo of the Future (2020) exhibition, ZOOOF engaged in speculative design around future relationships between humans and non-human organisms. For the installation, the collective collaborated with artist and geologist Esmee Geerken. By defining the park as a location where humans and other life forms meet, the notion of design is seen as co-design. This means that the park takes shape through a collaboration with non-human users. The concept is connected to the Shadow Floriade because it takes a look at the possibilities of non-human architecture.

Amsterdam is home to a number of forms of architecture made specifically for non-human organisms. The bat shelter and the walkways for squirrels across the Europaboulevard are examples from which the idea of ZOOOF and Zone2Source to design new architecture for the voluntary non-human inhabitants of the Amstelpark arose. To recognise animals as residents of the city, a number of workshops will be held with design students, adults and children from the neighbourhood, and local animals. During the workshops, based on observations of nature, they will build semi-temporary residences for animal life in the Amstelpark.