From 17th February until April 25, 2021
daily on display at the window of the Rietveldhuis

On display from 17th February in the window of the Rietveldhuis in the Amstelpark: RADIX, an ode to combating symptoms. by Collectief Walden. Very suitable for green lovers and haters.
This art installation is entirely devoted to the exotic Japanese Knotweed, Giant Hogweed and Water Fan. All three invasive exotics, very unwelcome, but can still be found in parks, gardens and waters throughout the Netherlands because they have been deliberately introduced here by human intervention. Our handling of this is actually indicative of our actions as a species, humans, on the planet.

When the measures allow, it will be possible, at a time to be confirmed, to stop by for a cup of knotweed tea and a good talk.

It’s a living, growing, sprawling project to which several artists shall contribute in the coming year. RADIX was germinated during Zone2Source’s artistic research program Exploded View, was first shown at Cultureland and is made possible by Prins Bernhard Cultuurmakersfonds.

RADIX is, beside a visual artwork, also a Dutch-language podcast, to be found on all the main podcast platforms as the Collectief Walden Podcast. Especially for the exhibition in the Amstelpark, we will launch a special episode with interviews recorded in the park with Geert Timmermans, city ecologist with the expertise of invasive exotic species and Jaike Bijleveld, project manager of the extinguishing and controlling of among other things the Japanese knotweed. Switch to the Dutch translation of this page to listen to the podcasts (in Dutch only). The music for RADIX was created by Matthias Sigurdsson and Babeth Fonchie wrote a poem dedicated to the piece. 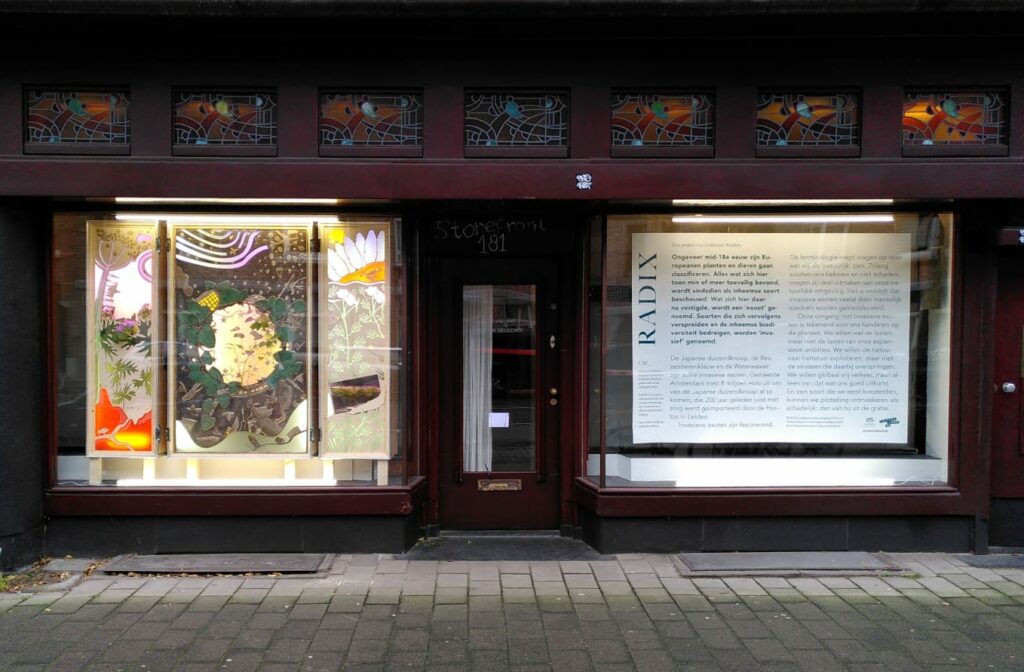 Japanese knotweed, giant hogweed and fanwort. Three invasive exotic species, found in parks, gardens and waterways throughout the Netherlands. They are very unwelcome, despite having been deliberately introduced here by humans.

Collectief Walden is fascinated by the phenomenon of invasive exotic species. We see our human relationship to them as reflecting our broader actions as a species on this planet. As long as other species please us and aren’t harmful, they get to be a part of our natural environments. But a species that we once cherished can suddenly be revealed to be harmful: then, it falls from grace.