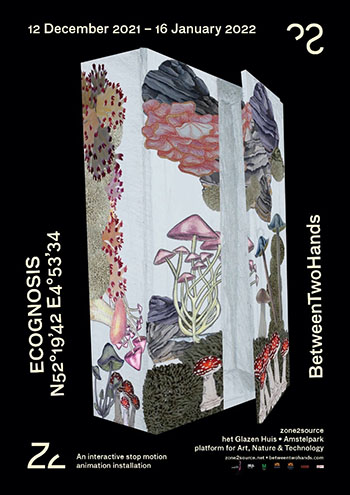 BetweenTwoHands consists of the artists Erin Tjin A Ton and Gosia Kaczmarek. Together they have been creating theatrical, visual installations since 2015. Ecognosis N52°19’42 E4°53’34 is an interactive stop-motion animation installation in Zone2Source’s Glazen Huis in the Amstelpark, which will be on view from December 12, 2021, to January 16 2022.

The opening of the exhibition takes place on the 12th of December from 15.30 – 18.00h. Warm glühwein will be served to celebrate the opening!

On January the 5th, there will be a stop-motion animation workshop for kids.

BetweenTwoHands consists of artists Erin Tjin A Ton and Gosia Kaczmareck. Together they have been making theatrical, visual installations since 2015. Ecognosis N52°19’42 E4°53’34 is an interactive stop-motion animation installation that can be seen outside the windows of the Glazen Huis of Zone2Source in the Amstelpark. BetweenTwoHands is inspired by the book The World Without Us by Alan Weisman, in which he describes how different locations in the world are overgrown by nature once man is no longer there. This raises the painful question of how far nature needs humans or is better off without humans. All the means by which we try to save nature do not outweigh the speed with which man destroys nature. When we take the plane or leave garbage on the street, it is not immediately visible what impact this has.

Through this installation, the artists want to make tangible how humans influence nature and to imagine what a world without humans would look like. The artists are converting Zone2Source’s Glass House into an enlarged living room that has been cut in half (due to a natural disaster) and can be viewed from the outside. They make white cardboard furniture on which stop-motion animations of plants and insects are projected as if they are slowly but surely taking over everything. Specific plants and insects that occur in the Amstelpark are imitated and animated. As if the park has found its way in.

About BetweenTwoHands
BetweenTwoHands is an artist duo composed of visual artists Erin Tjin A Ton (NL, 1985) and Gosia Kaczmarek (PL, 1981) and each project is expanded with third parties. Erin and Gosia share a studio in the Costa Rica breeding ground in Amsterdam and are graduates of the Gerrit Rietveld Academy in Amsterdam.