This is an open rehearsal of the piece Isolario by Dario Calderone, the full performance, including graphics will be scheduled later in 2021-2022 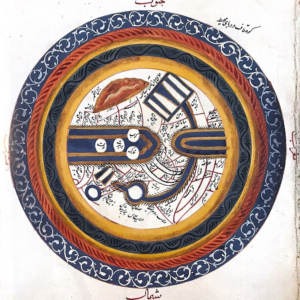 ——-
Isolario
Isolario, by Dario Calderone,  is a collection of texts, images and musical scores, which can be performed, or justimagined, by any duet of instruments or voices. The musical scores take the form of cartographic works which are visual descriptions of imagined places or spaces copies, told, re told and copied again over the last 1000 years inviting the performers to re-create a space within a space. Mapping not for the purpose of navigation but rather mapping a narrative of ideas.

Carto-ideographs from the Arab and Persion Medieval Tradition
The graphic part (not on show at this particular performance) includes a compilation of 20 cartographic works from different sources of the Arab and Persian medieval tradition, defined as KMMS, from the acronym of the work of Iṣṭakri (b.-d 957AD) Kitāb al masālik wa-al-mamālik Ṣurāt (Book of Routes and Realms Picture). The use of these non-mimetic maps was certainly not for navigation, as in the case of the modern ones, but they had an iconographic use: they could be defined as carto-ideographs. Therefore these pictures can be seen not as descriptions of territories but rather as spaces, in a very similar way as graphic scores do not describe necessarily the final auditive result