Zone2Source’s curator Alice Smits and Machine Wilderness’ Theun Karelse presented their collaboration at the yearly festival Digital Design Weekend in the Victoria and Albert Museum. The festival opens up to the public for a hands-on experience of emerging technologies and design. Machine Wilderness was set set up in the museum garden to showcase prototypes of the program to human and non-human visitors.

They were joined by Ian Igram from LA, who participated in the Ars Bioarctica expedition in Machine Wilderness and by Matthew Creasey, a behavioral ecologist who participated in the Cornwall session. Contributions included works by Spela Petric, Antti Tenetz, and a prototype from Cornwall was shown made by the group led by Ivan Henriques including Justin Marshall and Jo McCallum.

The museum reached full capacity, with a record of 14.000 visitors. They were met with great enthusiasm, interesting questions, and the occasional song. Telling the story several hundreds of times a day takes lots of energy, but they handled it well. Alice and Theun also appeared on “Engineering the Future” – part of the Victoria & Albert Digital Design Weekend 2016 – for some insights on the project and the philosophical drive behind it. Here is what they have to say:

“Machine Wilderness is a speculative arts and science programme which explores what our machines could look like, now that they are becoming permanent inhabitants of our landscapes, part of material flows, foodchains and layers of communication. In particular, it looks at environmental robotics,
designing ‘pseudo-organisms’ as agents in their own right that inhabit and participate in specific habitats and ecosystems. The challenges associated with the Anthropocene make evident that the
earth’s systems are not separable from human activity, and really never have been. For centuries, civilisation meant separateness from nature, while connectedness to nature was deemed as primitive. Our modern sense of emancipation and freedom is caught in this opposition to nature. Now that
it has become clear that our cultures and technological innovations are destroying the very earth that supports our existence, we need to find a new meaning for emancipation and rationality coming from a new sense of connectedness and cohabitation. 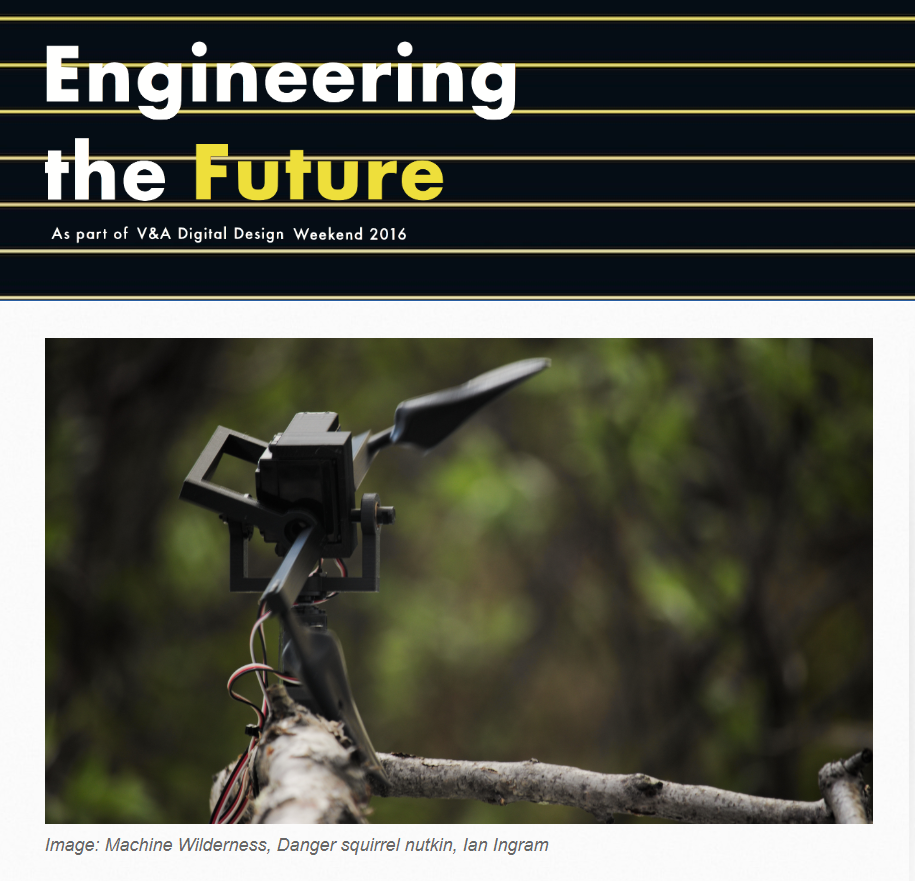 At the Digital Design Weekend, Machine Wilderness will set up in the garden and present, amongst others, works by Ian Ingram, whose robotic creatures explore the possibility of communications with biological life forms through various means of gesturing and sound installed at a nearby tree and pond, while Slovenian artist and biologist Spela Petric’s project Naval Gazing consists of a kinetic art machine, which simultaneously acts as a platform for the attachment of organisms, creating a travelling, uncontrollable transient biotope in the oceans. Machine Wilderness will offer video documentation of further projects and workshops, as well as prototyping design tables where we invite the audience to participate in the imagining of ecological robotics. Machine Wilderness is a collaborative research project between Theun Karelse of FoAM – a cultural laboratory re-imagining possible futures in the interstices of art, science, nature and everyday life – and Alice Smits, initiator and artistic director of Zone2Source – an exhibition platform in three pavilions in the Amstelpark in Amsterdam which presents art projects, discussions and workshops focusing on developing new relations between art, nature and culture/technology. Machine Wilderness was the theme given by Andrea Polli to the ISEA 2012 symposium, and originates from writings of cultural geographer Ron Horvath in the 1960s who considered the impact of cars on the planes of the Southwest. Machine Wilderness referred to the task for artists and technologists to present “ideas for a more humane interaction between technology and environment, in which ‘machines’ can take many
forms to support and sustain life on Earth.” It is used here with full respect for that context.”

In the press, News