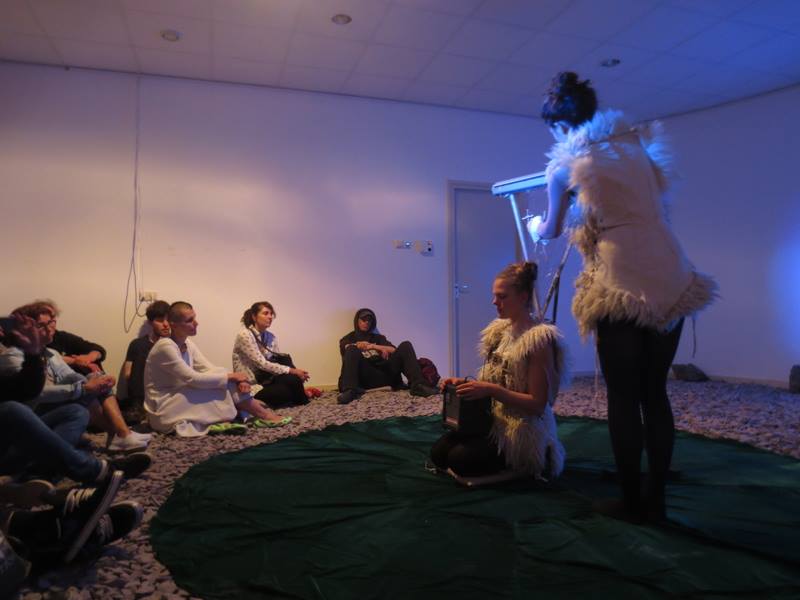 “Magnetoception: a sense which allows an organism to detect a magnetic field to perceive direction, altitude or location.”

Magnetoceptia is a series of performances and installations in which self made antenna-based costumes pick up electromagnetic fields and translate them into electronic sounds. Bended hazelnut rods, bamboo stems or a recycled spinningwheel combined with open electronics and coils of copper wire wound into different patterns into the costume, the project is an investigation on different properties of natural and technological materials. The experienced sound is site specific and depends on the electromagnetic fields that are present on the location. It is modulated by the performers by their positions and movements relative to the space and each other.

The ‘homo superiors’ (Friedrich Nietzsche) gain the ability to grow far beyond their human limitations and evoke a transformation not just physical extension, but also through sound and change of their ‘soundshape’ constantly audibly mirroring their sourrondings.

The production process as well as the presentation of the project Magnetoceptia each time arises from the site-specific properties of the environment where it is developed and executed, in terms of sonic and physical peculiarities, culture, geographical position and historic background of the particular location.

An installative stationary and processual sonic performance will be developed and executed in and surrounding the respective venue, in which the audience becomes mobile part of the setting. Performers wearing the actual antenna
based costumes that generate electronic sounds, mixed with sound, video and natural and technological physical elements from foreign environments will all be united into the performance which will take place in the park (schedule to be announced).