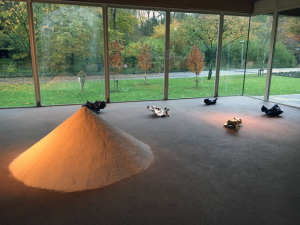 We are  marking our first four years in operation with an exhibition dedicated to an artist who has been working for decades with this subject matter which is important source of her inspiration.

This New York (artist born in 1949) has exhibited since the late 60s and her work is featured in many major museums and private collections, but has yet to be shown in the Netherlands. We plan to set this straight with an exhibition of new and significant older work from November 6th to December 31st, 2016 at the Glasshouse, which will allow Dutch art lovers to acquaint themselves with an oeuvre that especially now resonates widely. 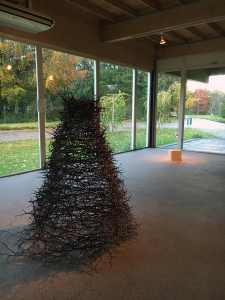 Bradshaw is one of the forerunners who has allowed the unpredictability of nature to play a central role in her work. She is generally acknowledged as a pioneer who brought the concept of “indeterminacy” from music into the visual arts. From 1969 inspired by the work of the great 20th Century composer, John Cage, a long-term friend with whom she collaborated, she has created chemical paintings which change in the atmosphere, erosion sculptures of salt and stone and crystals which capture radio signals. John Cage included her work in his 1993–95 “Rolyholyover Circus,” consisting of his selection of 20th Century art which traveled across America to Japan. Together with her partner of four decades, the conceptual artist William Anastasi, she was Co-Artistic Advisor for the Merce Cunningham Dance Company from 1984 until it’s closing in 2011. Since the 70s her work has regularly exhibited in North and South America, Europe, Korea and Japan and is presented in among many other institutions, the Metropolitan Museum of Art and the Museum of Modern Art, New York, the British Museum, Le Centre Pompidou and the Russian State Museum in St. Petersburg. 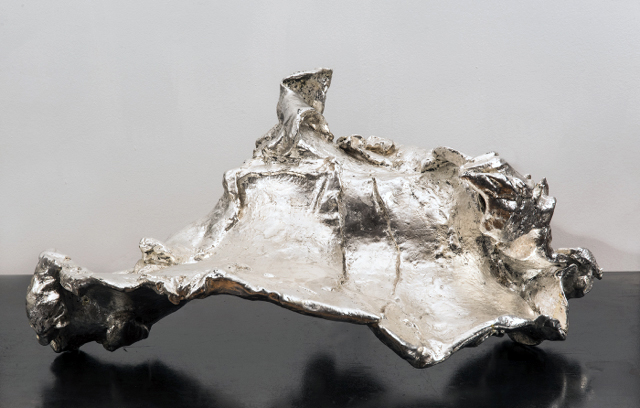 Negative Ions II (1996-2016) consists of a seperatory funnel hanging above a sculpture of salt. Every minute 5 drops of water fall on the salt that slowly erodes. The experience of time is a central subject here as in another work Waterstone (1996-2011), in which an interaction between water and limestone takes place with even slower effect. The use of natural materials and the slowness of the action takes us out of the speed of contemporary existence into another dimension of time.

The theme of cultivation of nature and the nature of culture can be found in works such as Home (2008) a sculpture of the thorns of Honey Locust woven into an impenetrable nest and II series, Nothing 3 (2004) consisting of two brons cast broken eggshells that originally were accompanied by an installation with live birds. Also on view is a new work, Spent Bullets, a series of 3D printed and enlarged fired police bullets in which the violence is frozen in the transformation of the material. In the back space of het Glazen Huis the video Space Time (2011) is being shown. It is based on the sculpture 2 √0, also on display here, which vertically is a clock and horizontally a level. The duality of the object is brought into relationship to John Cage’s music piece Ryoangi (1983-85), a duet for percussion and an instrument chosen by the performer, here a timbale and a flute.

Nowadays many artists engage in exploring the complex relationships between nature and culture while making scientific research an important part of their artistic practice, giving even greater relevance to Dove Bradshaw’s work today.