We are revisiting Marjolijn Boterenbrood’s Parksporen as Zone2Source is planning to incorporate her alternative map and other artists’ insights into producing a new growing map of the Amstelpark. A new map including existing art works, multi-sensorial experiences, and the artistic and historical backgrounds forming every inch of the park’s identity. The project is part of Zone2Source’s major plans for the Amstelpark and the first version will be soon available in print and online.

Regretfully, I wasn’t there in 2015 when Marjolijn carried out her one-year research project Parksporen on the flora-fauna ecosystem in the Amstelpark soil. This art project, and particularly the beautiful map Parksporen that is lying in our office [and which can be downloaded here: Kaart Amstelpark Parksporen (frontside, pdf)] always strikes me with curiosity. I decided to visit Marjolijn to get some insights into Parksporen and the other projects she presented at Zone2Source. 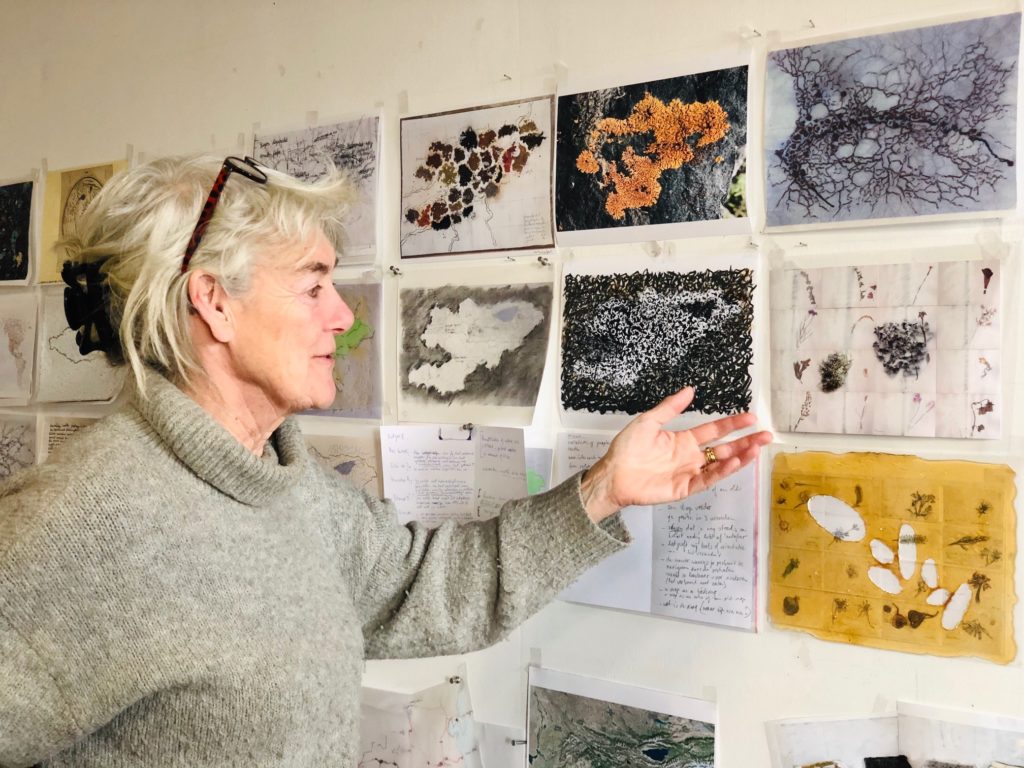 Elephants and a Sailor Father

On a breezy February afternoon, I visited Marjolijn’s studio located in a quiet, beautiful neighborhood near the ARTIS Zoo. Marjolijn welcomes me warmly, proudly sharing that she could often watch elephants with the view from her window. Hitting my sight first was the number and variations of maps in form of art hanging around in her studio.

That ignited our conversation right away, as back in Parksporen, Marjolijn created an alternative map of two parks – Amstelpark and Gijsbrecht van Aemstelpark. She further explains, “Together the parks connect, ecologically, the Amsterdam forest with the Amstel river at the center of the city.” The map’s subtitle – “This treasure map unfolds the life under the surface of the parks and the amazing processes that occur there” – suggests the project zooms into the microscopic ecosystems under the ground. Formed by these ecosystems, the paths are not only defined as walkways but also as traces of the flora-fauna environment that can be experienced through multiple sensorial paths: seeing, hearing, smelling, touching, tasting. The map became the result of Marjolijn’s work. Growing up at sea since her dad is a sailor, Marjolijn came to take maps naturally.

“Maps, in one sense, is personal to me. In my way of understanding the world, maps are a navigational method, a communicative means, and an educational tool. All of these functions successfully turn the map into a new lens to view the Amstelpark. They primarily present invisible elements of the Amstelpark’s nature: the creatures hidden under the ground that makes up 50% of the park experience.” 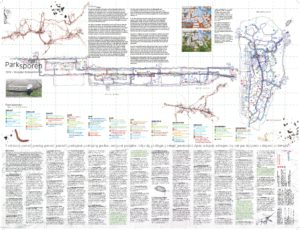 The map was very ambitious in capturing all of Amstelpark’s characteristics, with the consultation of aquatic and soil scientists as well as bird experts. It is also interactive, as it does not only navigate visitors but also gives directions on a full experience of the park that otherwise remains hidden or uninviting. For example, it instructs you to come to a specific location and search for a worm underneath your feet or try to hear the sound of the sea by listening to the sound of winds rustling through trees. The activities are categorized not only by senses but also by months of the year. As the Amstelpark’s nature remains almost intact five years after the project, the alternative map is still applicable and visitors can still follow its same directions. In fact, the map proves itself so useful and popular that the original 700 copies came down to only 30 now.

Collected seeds on hanging sheets of paper, discussions, workshops, drawings, dinners made from flowers and lobsters found in the park and exploration-walks with children, are parts and parcels of Marjolijn’s process to connect with the public. The stages led to the map Parksporen (2015) and artworks in the exhibitions Growing Matter (2015), Air, Water, Soil (2016) and Mapping the Ground, Grounding the Map (2018). The process opened up a broader sense of experiencing nature and added an extra layer to the visual imagination of the park. 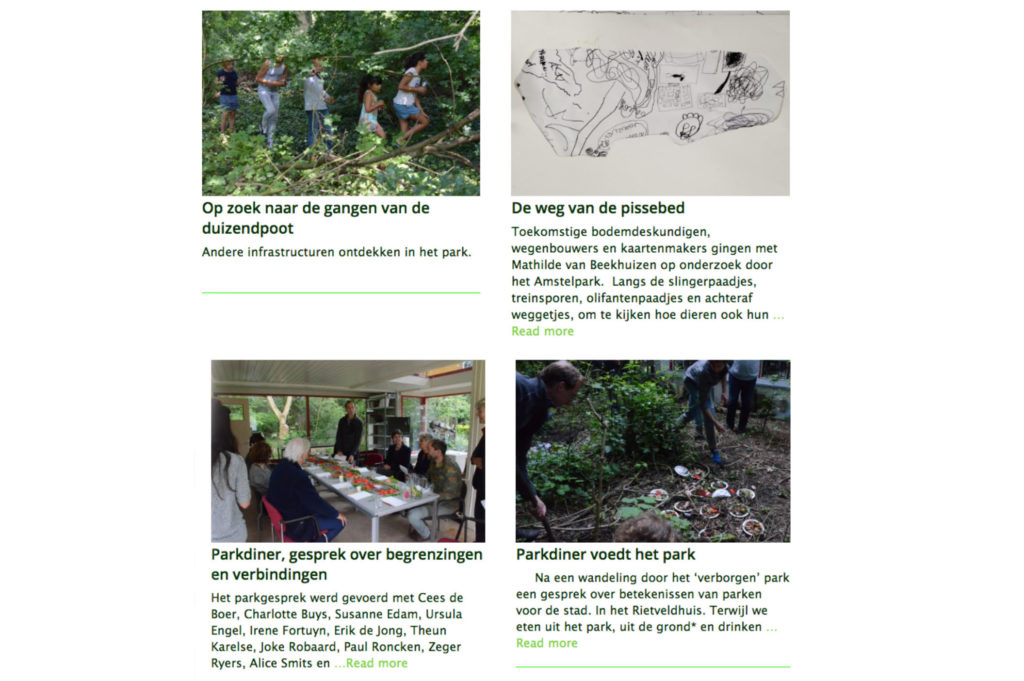 The Ground and Human Interactions

On discussing the subject of her research – the ground, Marjolijn explained that the humus layer is significant in providing a habitat for the fauna to break down CO2 for minerals. Within the humus, the fungi connects and communicates with roots. The richer the humus is, the more ready the environment is to restore its health and connect with its inhabitants. The soil, therefore, represents the miniscule dynamics of a city’s environment. 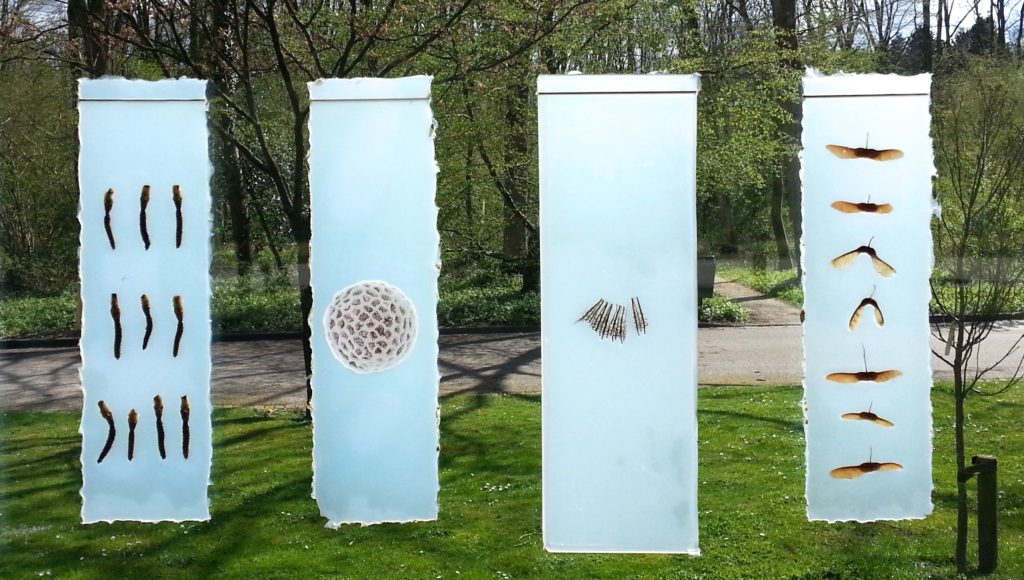 Playing Soccer Above an Ecosystem

“Children engaged first-hand into the activities, collecting insects and keeping records of their traces on the paper to make a new map. Children are very open to new approaches to art and nature. They perceived my artworks and presentation as natural, while adults would consider them abstract and hard to accept. It suggested that children show a wider range of imagination and acceptability, while adults pretty much acknowledge nature and art from a framed and preconceived perspective.”

This gap in perception shows that Marjolijn’s projects are beneficial in educating children about nature and igniting adults to question their preconception of the surrounding world. “Nowadays, children have a dormant relationship with nature. They play hockey or football on the grass without knowing that a rich ecosystem is going on underneath them. Unlike big animals such as elephants and lions, the platforms for the microscopic creatures are limited, although all are equally important in balancing the ecosystem and the food chain. The ignorance of the microscope environment also leads to the lack of awareness of the decreasing microscopic population, which Marjolijn hopes to overturn through her projects.”

A More Intimate Relationship with the Park

In the context of Zone2Source’s latest program, Tuinbazen, organized by Irene Fortuyn and Ketter & Co., Marjolijn’s insights on her project contribute to the thread of park management and nature preservation. Should we build a more intimate relationship with the park by looking more closely into its nature, including the invisible lives? How does the multi-sensorial experience function in our perception and appreciation of an ideal park? With that saying, park management no longer comes down to only taking care of the park’s physical appearance but also understanding and connecting with the park in different ecological dimensions and sensorial levels.

Marjolijn’s next plan is to investigate and map how people interact with nature in other parts of the world to convert the idea that humans own the landscape into the landscape owns humans. In 2021, she will participate as an artist in residence in Vlieland where she would use waves, tides, and winds movements to make drawings. The project interestingly correlates with the island’s name, with “Vlie” translating into “current.” Other than that, she fancies the thought of carrying Parksporen over to other parks in Amsterdam or even in foreign countries, where exotic climates and cultures result in ecosystems and viewpoints that are much more different from the Netherlands.

Marjolijn treasures the one year of the project at Zone2Source with the fulfillment and richness she gained. Ending our talk, Marjolijn was hopeful that the project added new nuances to the park experience, not only then, but also now.

Anh Dinh is currently doing her MA in Arts and Culture at UvA. She is an international student from Vietnam and intern at Zone2Source (2019-2020).